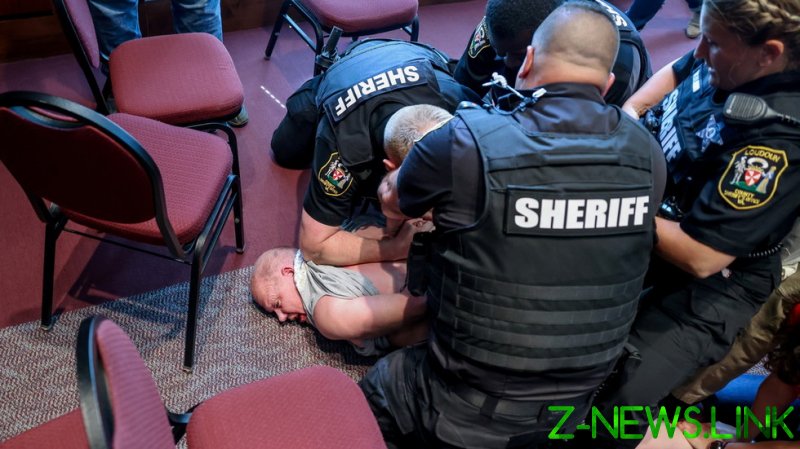 As a parent of schoolkids, I’m all up for pastoral care, a bit of safeguarding, wellbeing and welfare protection but when that oversteps the mark into teachers and administrators deceiving mums and dads about what’s going on with their children, I’m sorry, that’s too much.

If that deception, however, also involves the cover-up of children being raped by their fellow pupils as a result of a woke school administration’s gender policy, then that would take most parents’ anger to a whole new level.

When Scott Smith tried to raise the matter of his daughter’s rape by a ‘skirt-wearing’ male student at Loudoun County School in Virginia, the 48-year-old plumber was dragged from the room of the school board meeting and when a video of the incident went viral, was ridiculed on social media as some sort of deranged, right-wing nutter.

Funny thing is, it looks like Smith was right. The then-14-year-old boy had been arrested for the assault on his daughter but the local sheriff’s department did not release details of the attack at the time largely due to the legal position on dealing with two juveniles so the incident went under the radar. The same boy, however, was later arrested at a different school after allegedly holding another girl in a classroom where he attacked her.

It doesn’t take a psychiatrist to identify a sexual predator, which would appear to be the case if these allegations are true and while it’s disturbing in a teenage boy, the fact that he was able to exploit the right-on schools’ transgender policies to gain access to young girls is the real frightener.

While this might be a rarity, there is no doubt that predators are awake to the opportunities afforded them by gender fluid school policies and that far more rigorous scrutiny is required if we allow the critical theorists of gender into our classrooms.

That means the sneaky school district in achingly progressive Canada that encourages staff to help students hide their ‘transgender idenity’ from their parents should be roundly condemned, and really, so too should the sleepwalking parents who have spent a decade unaware this was even a thing.

For it seems that the Toronto District School Board published its initial Guidelines for the Accommodation of Transgender and Gender Non-Conforming Students and Staff way back in 2011 – although it’s just receiving attention – and it reads like the gender gestapo handbook.

Packed with all the familiar terminology of the progressive views on critical gender theory, it would be funny if it just wasn’t so damn infuriating. Taken as a given that gender identity and natal sex are inarguably two separate things, it covers ‘gender expression’ as an extension of that fallacy. It declares that a student’s gender can be determined in terms of “the volume of their voice, and in the choice of whether or not to wear make-up.”

It even ventures into fantasy land, ensuring that students who identify as ‘two-spirit’ are encouraged to pursue their gender journey. In case you’re puzzled, as a member of the ‘settler society’ then you most likely are, this term was “coined to reflect specific cultural words used by First Nations and other indigenous peoples for individuals who have both a male and female spirit.”

While this exploration of the spirit world is fascinating, the rest of the guidelines are somewhat more disturbing. Of course there is the usual focus on amending official records, preferred pronouns, choice of bathrooms, dress codes, sporting activities and changing rooms. The students, who no doubt are in a minority, unless I really have missed the bigger picture here, have their wants given priority over the rest of the student body. I’m not sure that’s fair.

I’m also not sure it’s fair to ask that school teachers and administrators be complicit in students deceiving their parents. There is no other way of seeing it when the language is so unequivocal: “Some transgender and gender non‐conforming students are not open about their identity at home for safety or other reasons. A school should never disclose a student’s gender non‐conformity or transgender status to the student’s parent(s)/guardian(s)/caregiver(s) without the student’s explicit prior consent. This is true regardless of the age of the student.”

Regardless of the age is the kicker here because these guidelines even cover children at nursery, aged from just three years old. The question it leaves open is why should boy/girl/unsure be the only options? What if little toddler Tommy says he wants to be a doggie? Maybe nursery staff should encourage him to chase cars and bark at cars rather than deny him his canine identity.

The temptation for us in the UK where critical theory on gender, although prevalent, at least meets some pushback is to put on a smug grin and declare, ‘never here’, but the reality is that a document not that far removed from that in Toronto already forms part of Scotland’s official guidance, Supporting Transgender People in Schools.

So far we’ve had no reported incidents of rape or sexual assault in the school environment by sexual predators, although incidents have arisen when trans women are imprisoned on the female prison estate.

What we need to ask ourselves is whether more assaults are just a matter of time, or was this attack a grossly aberrant one-off? Either way, it should make any school considering implementing a transgender policy to determine if, in attempting to make a small minority of pupils feel safer, they are endangering the welfare of their entire student body.

It’s not transphobic to contemplate this. It’s all about being a parent.