Home / policy / A suspected coronavirus: the conditions in which persons in quarantine in Moscow

A suspected coronavirus: the conditions in which persons in quarantine in Moscow 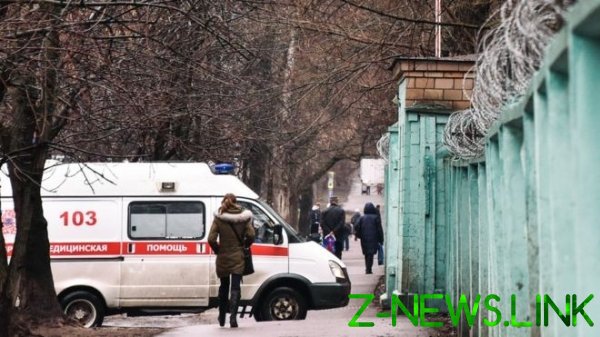 People who because of a suspected coronavirus were in hospital quarantine in Moscow, complained to the social networks that they are kept in the hospital against their will and not ease the symptoms of diseases. Russian service Bi-bi-si has spoken with two of hospitalized.

On March 2, the headquarters for combating coronavirus and Rospotrebnadzor confirmed that the infection is discovered the Russians, who returned from Italy.

“On March 2 confirmed imported from Italy case of new coronavirus infection Covid-2019 from the citizen of the Russian Federation, – stated in the headquarters. – According to the epidemiological investigation established that the young man was ill 21.02.2020, while on vacation in Italy.”

In Russia the young man returned on February 23, lived in a private house in the Moscow region, and on 27 February appealed to the clinic with symptoms of SARS, where he was sent to the infectious diseases hospital, Interfax reported.

As announced on 2 March, the mayor of Moscow Sergey Sobyanin, the doctors hospitalized the 13 passengers of the flight, arrived in Moscow from Italy, along with the infected with coronavirus Muscovite, as well as 11 members of his entourage.

Several media reported that a sick employee of the Russian football Union David Berov. He later wrote in his Instagram that at first lay in the General ward and not sure I have contracted it in Italy.

“The final tests that were sent to Novosibirsk with my tests still didn’t come, and Protocol no, just that the doctor said,” he writes on his page in Instagram.

He is surprised that all his relatives was taken to the hospital “even without suspected SARS”.

Bi-bi-si talked with the brother of David who also is in the hospital.

“We quarantined when I say “we” I mean all members of his family. We got your tests back and they are negative, March 3, we should come the results of the second tests. They do not differ according to the method of capture, I don’t know what the meaning may be, they are just another instance takes. Everything about the future, our fate, all that remains in this foggy haze. Because we do not understand how we will treat or not to treat, how long we will sit here, what amount of blood and saliva we should take, etc. no one knows – probably because the virus is new and no one has had other things to do.

How they will be treated on David, we do not know. In General, since cures for coronavirus yet, you treat the symptoms.

We have all of our family, there is not a single symptom. Residual symptoms of either cold, or coronavirus, is our brother. A small cough but that’s all.

I must say that David was forced to go to the clinic mother and friends. Not that he fought really hard, he didn’t know what to do. Was a little cold, a little sore throat.

But as the situation in Italy, where he landed, hard, he decided to go. Absolutely not regret about it, and everything is fine. Good that pay a lot of attention.

The common theme of communication of the doctors with us is that although there is no vaccine against the disease, the disease, so to speak, is overrated. Don’t know how true this is. The conditions in which we are here, pleasant, normal. This is the first infectious hospital of Moscow. Here good equipment, the staff I have is just positive feelings, we are more understanding. They do not refuse to answer questions, though those answers among themselves they have”.

Memo from the authorities

As stated by the mayor of Moscow Sergey Sobyanin, all citizens who come from China, Iran and South Korea, issued a ruling on exclusion, recorded their contact details on the photograph is taken, the analysis of coronavirus infection. Those who arrive from Italy and other countries “with the adverse situation by coronavirus infection”, issued with notice of the recommendation compliance with the isolation regime at home. They also filled out a questionnaire with contact information and pictures.

There are also recommendation is not to self-medicate.

“Call the doctor or call the ambulance. Be sure to tell your doctor the timing and itinerary, calling attention to the fact that you came from a country affected with the coronavirus,” reads the memo.

World champion Billiards Junior Russian Christina weaver was one of those he called the doctor after the onset of symptoms and was quarantined in the hospital. However, according to her, the isolation was delayed longer than she expected.

I think I went a little bit sick in Italy. Because of what began to happen – you know, you begin to cheat yourself. And so I thought who knows what. Than sitting to tremble, I better go get checked just in case, because – well, I feel sorry for three hours of your time? Of course not. I called an ambulance, because on TV and the Internet said no need to go anywhere – call an ambulance if you have suspicions. So my sister did – we called an ambulance, gave me a look, gave me a sore throat, was brought here.

Then took the analysis said it will be ready on Saturday. That is, I put just a night. Then said the analysis would be on Monday. On Monday, while everyone started to arrive, our two nurses called in sick, and came to us with another girl, not our doctor. She looked at our card and said there was no analysis no on a coronavirus. We went to the zavotdeleniye and only then he said that all the tests came back negative, including David.

We are in neighboring wards were – we went to a toilet, we went to one shower we were standing in one queue to be tested. When we went for x-rays, next was regular patients. We could be a threat, because it was not yet known, we have negative or positive results. To the girls who have already had two negative test, began to settle newcomers who have the potential to be sick.

Now I do not let go. Given an expectorant when I have phlegm, I cough. I gave alferon is an antiviral. With me in the house lying girl – she has the flu B. she had in her records said her some washing do some pills give. She did not give any pills do not give. That is, we just got here, and I can not vouch for others, but judging by those who are with us lies, none of our diseases do not cure us.

We called the CPS, we listened to it and just hung up. We called the Ministry of health of Moscow – there is not picked up. We tried calling, but no one said anything. The doctors say that we have no rights, only responsibilities, because we are potentially dangerous to society. And communicate with us as if we are prisoners here, and not sick. When asked why all of us are accommodated in this chamber, we are told that we are not afraid to go to Italy when there was the flash, and now you’re afraid of then lie. The door of the compartment closed with a key.

And most importantly, then came the check, and suddenly we started to wash the floors and hung the toilet paper. The staff laughs – what is the coronavirus, there are nurses, the medical staff, through times putting on a mask.

On Tuesday morning we were transferred to another hospital, in Kommunarka. Explained by the fact that he heard our complaints. There are double rooms, but we still quarantine.”

Sister Julia Christine was discharged home on this she wrote on his page on “Facebook”.

Bi-bi-si asked for comment in the Federal service and the Department of health of Moscow.

The Department of health referred to the statement of Sergey Sobyanin, in Rospotrebnadzor explained that the act on the basis of the decision of the chief sanitary doctor of 31 January.

There, in particular, there is a recommendation to conduct a “medical supervision at the place of residence or isolation for people returning from China in 14 days” – other countries in the document are not mentioned.