Home / WORLD / A second UK Covid-19 lockdown is doomed to fail: Brits have no faith in their leaders anymore and won’t comply 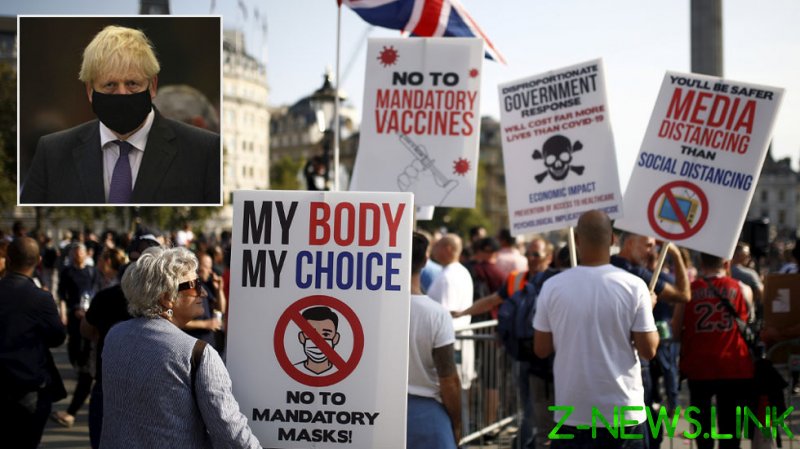 A looming second lockdown in the UK, as part of the Government’s haphazard approach to dealing with the coronavirus pandemic, is destined to fail for one reason: the revered ‘Blitz spirit’ that we’re all in this together has vanished. Now it’s everyone for themselves.

For several days now, there has been talk of another imminent imposition of harsh restrictions on our movement. While the first national lockdown was universally accepted, any follow-up – call it ‘a circuit breaker’ or whatever clever name you like – is going to be a little trickier.

Look at what’s happened in Madrid over the weekend, where a wave of protests hit the Spanish capital with people taking offence at the regional president’s efforts to reduce an infection rate in some areas of more than 1,000 per 100,000 by restricting the movements of 850,000 people.

And when Isabel Dìaz Ayuso bluntly suggested it was the “way of life” of the immigrants living in those neighbourhoods that was contributing to the problems, the mob insisted she resign. What for? Trying to keep them safe?

Remember, Spain had a draconian three-month lockdown that saw kids shut up indoors over summer, but they recognised they were all in it together and stuck to their guns. Now that spirit has dissolved, as people claim the government is spreading fear and hatred among already marginalised communities. Attention has turned away from battling the pandemic to fighting among themselves.

That easygoing compliance has hardened in the UK as well. We’re not so accepting of the words coming from the familiar Downing Street podium these days.

Because we’ve now had months of expert home tutoring by the impressive duo of government scientists Chris Whitty and Patrick Vallance, whose careful, measured explanations and predictions have driven the real narrative behind the boosterism of the government’s “moonshots” and “world-beating” boasts.

Last week it was Boris Johnson telling us it would all be over by Christmas. Now Health Secretary Matt Hancock says maybe not. That kind of ‘he said, she said’ nonsense is a test to anyone’s patience, but you can see where the desperate-to-be-loved PM is coming from.

People want a return to normal, even if that ‘normal’ is different to what we are used to, and BoJo is keen to be the one to deliver the good news.

But if we want to see past the bluster then we need to stick to the facts. So poring over infection rates, and that all-important key number of cases per hundred thousand, is giving us something to focus on in how we deal with this unbearable mess in our regions, cities, towns and villages.

The problem with giving all the statistics to the public is that people digest them, poop them out, scrunch them up into a big stinky ball and throw them back in your face.

An in-depth understanding of what those figures mean can be used against the very same government experts who delivered them. We know the concerns over the spread of the disease increase when the infection rate tops 20 per 100,000, so let’s look at that on the ground.

Of the 32 London boroughs, 18 currently have infection rates over the threshold that starts to ring alarm bells. But that means 14 do not.

So, accordingly, there should be some further lockdown measures in those areas above the limit but not in the rest. For instance, the borough I live in is way down the list, as too is Westminster, smack bang in the middle of town taking in large parts of the West End, where shops, bars and restaurants desperately need customers, drinkers and hungry patrons to survive. To enforce a shutdown on them and the awful impact that would have on their chances of survival would be economic and psychological cruelty. So leave Westminster off the list.

It’s hard to understand why the Mayor of London, Sadiq Khan, would be asking for a universal lockdown of the capital, when he should be doing everything in his powers to keep the wheels turning wherever he can – even if that means pedalling a bit slower than usual.

He shouldn’t be briefing against the government on the back-to-the-office edict because it’s not just frustrated office-dwelling bosses who feel they’re operating at less than full strength. Public transport, sandwich shops and related businesses are also losing out.

But the problem with London’s diminutive Mayor is that he feels left out of the loop and is continually looking for political traction with one eye on the elections next year. Like his former Labour colleague in Manchester, Mayor Andy Burnham, he wants an invite to sit at the table with the grown-ups at the high-level COBRA meetings where he can pretend any contribution he can make is indispensable in the fight against the pandemic.

Unfortunately for the pair, those invites are not about to come, so we are stuck with two upstart regional leaders posturing, preening and tweeting for attention. Thanks to that expert coaching I mentioned, however, many of us are now just as well-informed as those purportedly in charge with the added benefit of viewing the upheavals without the skewed prism of politics.

We are all feeling the still-resonating economic and psychological aftershock of the months spent shut up indoors. Now we’ve emerged, the damage to our high streets and shopping precincts is clear.

Shops have dismissed their staff and pulled down the shutters, never to return. We now have to queue on the footpath outside just to enter stores we previously rarely honoured with our custom. Friends and family are out of work, public transport is only an option of last resort and we step over discarded facemasks in the streets as if they were spent condoms. It’s a brand new world, indeed.

But lockdowns covering wide swathes of the nation are not going to win the public support needed to make them stick successfully. There must be a bit more creativity and clever thinking from our leaders, and a bit less patronising and bullshit if we are to smoothly negotiate a second Covid-19 wave.

It can be done but a second national lockdown is not the approach to use.