Home / WORLD / A revolution will NEVER AGAIN happen in the US: Today’s demonstrators have no real goals beyond snapping that protest selfie

A revolution will NEVER AGAIN happen in the US: Today’s demonstrators have no real goals beyond snapping that protest selfie 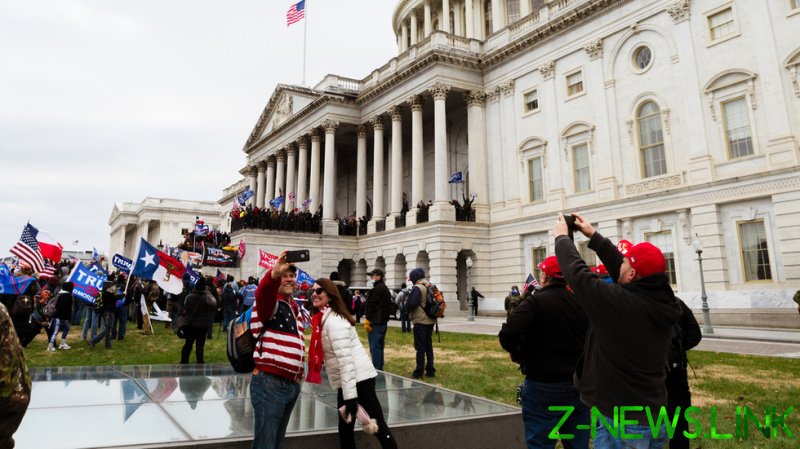 While the US was founded in a revolution, somewhere along the way its inhabitants forgot how to successfully stage one – and, in the process, became easy prey for those in need of cannon fodder for their own battles. Certainly, there were large and successful public movements during the 20th century – the civil rights struggle, the anti-war movement, women’s suffrage, and so on – but at some point, the ruling class became accustomed to the tried-and-true tactics of marching with signs, shouting slogans, and even blocking traffic.

As the powers-that-be became more accustomed to seeing large numbers of people turn out to call them nasty (if well-deserved) names and taunt them with clever rhymes, the utility of demonstrations – no matter how massive – all but disappeared. A thoroughly domesticated media establishment can opt not to cover even the largest protest or rally, or misreport its numbers – and the gatherings themselves run the risk of being co-opted by whomever has the loudest voice. This became abundantly clear during last year’s Black Lives Matter (BLM) protests, in which some groups remained entirely peaceful while others, incited by a relatively small faction of demonstrators, tore up their cities and set them on fire.

Fewer and fewer Americans have the time or the inclination to understand complex political issues. Taking interest in ‘causes’ has become more of a trend than a commitment, and these shallow ‘movements’ travel around the world just like a fashion trend would, aided by subtle ‘nudges’ from the media. CNN covers ruling-class-approved political ‘uprisings’ such as a parade or a fashion show – so much so, in fact, that their coverage of last year’s riots in Hong Kong actually included a handy ‘what-to-wear’ guide for wannabe activists and fawning over the rioters’ makeshift weapons. Back home, they gushed about the “mostly peaceful” BLM demonstrations while fires literally raged in the background.

Frustrated Americans with a vague, nagging sense that something is wrong with society are quick to resonate with the protest behavior they see on the screen and the inspiring (if not necessarily true) stories that accompany it. Taking to the street armed with a sign and a list of well-worn slogans becomes a political rite of passage, a quasi-religious affirmation that one is Doing Something™ to make the world a better place. Once in the middle of a crowd crackling with potential energy, the individual is no longer thinking as an individual – except maybe to take that crucial protest selfie. Pics or it didn’t happen!

Protesting for show isn’t the only element wet-behind-the-ears American slacktivists share with the US-backed color revolutionaries abroad. The leaders of carefully choreographed uprisings ‘over there’ target disenfranchised groups or ethnic minorities with scientific precision, sometimes even helping them with their cause before revealing to each group that their problems have all been caused by the governing body itself. These disparate factions, their trust gained by a few table scraps thrown their way, are then deployed as the manipulators’ revolutionary army while the manipulators themselves hide safely in their bunkers.

Similarly, in the US, the box-checking “trained Marxist” figureheads of BLM flood their message of hope and justice into poor black and minority communities, encouraging the residents to blame all their problems on systemic racism. These jet-setting professionals promise the moon and ask ‘only’ for the right to serve as the mouthpiece of the black community (as if there could be one monolithic ‘black community’) in return.

The rise of ‘intersectionality’ and competitive victimhood in the US and Western Europe have turned ethnic and religious factions that might normally be allies against one another, conning the downtrodden into picking fights with the people one rung up on the ladder while being blissfully unaware of their real enemies at the top. Only when those factions have been worked into a revolutionary lather are the full extent of the ruling group’s demands unveiled.

While these tend to bear little resemblance to the issues the ‘movement’ initially used to lure the disenfranchised into its ranks, it’s too late to back out by that point. The communities BLM has grown fat leeching off are still poor, desperate, and abused by police, except now there are more cameras filming the abuse, and another stream of income pouring – according to some activists, at least – straight into the Democratic Party.

Perhaps this is why many of the Black Lives Matter marches in American cities were so overwhelmingly white, joining up for that protest selfie and the ever-present need to boost their activist credibility. Even when they took over entire city blocks, as in the infamous Capitol Hill Autonomous Zone encampment in Seattle, there was no ‘next step’ in their plan, and their cosplay revolutionary zeal quickly evaporated.

This is hardly a left/right phenomenon, either. When pro-Trump protesters were all but invited in to the Capitol last week, many didn’t stay for long, and not only because the authorities had showed up. After taking that protest selfie with your feet up on House Speaker Nancy Pelosi’s death, what more is there to do? Confronting actual congressmen? That sounds like work.

There are a lot of justifiably angry people in the US right now – people who’ve been told that even admitting to their rage is wrong. But suppressing it by latching on to a series of shiny prefab ‘causes’ won’t make it go away, and nor will protesting for the cameras. A real revolution takes work – and that’s why it’ll never happen in the US again.