Home / WORLD / A ‘red wave’ of left-wing resurgence engulfs South America, which the US claimed as its ‘backyard’ but neglected to tend

A ‘red wave’ of left-wing resurgence engulfs South America, which the US claimed as its ‘backyard’ but neglected to tend 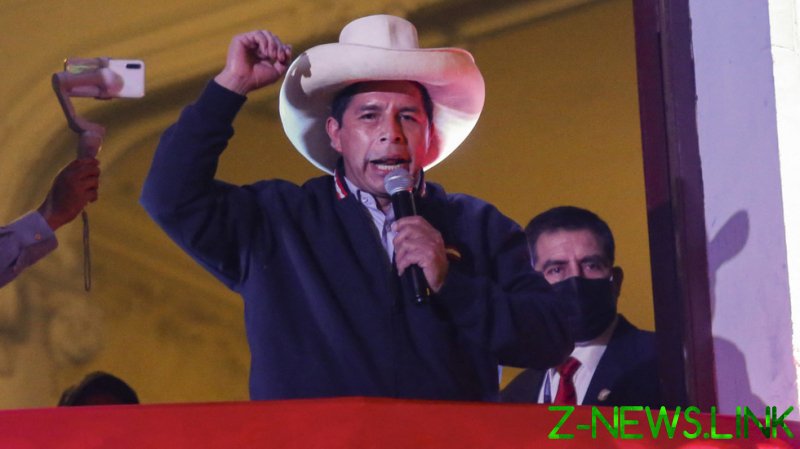 Over the past few days, many eyes in the Western Hemisphere have been on the hotly contested presidential election in Peru. Left-wing candidate Pedro Castillo of the anti-imperialist Free Peru party appears to have gained the upper hand against establishment figure Keiko Fujimori in an otherwise dead-heat contest, which the latter then accused him of rigging. The possible election of such a radical socialist, whose public image includes humble ponchos, sandals and straw hats, has been empowered by a generation of young people deeply disillusioned by the country’s spiralling inequality, prolonged poverty and corruption scandals, as well as rural voters and indigenous communities.

Yet, this is not a political earthquake in Peru alone, but in fact one of many increasingly spanning an entire continent. Latin America is experiencing a “red wave” – a momentous blast of left-leaning energy sweeping across multiple countries and empowering a thirst for radical change. As this election heads to its finale, protests and uprisings continue to sweep Colombia, Chile has abandoned its Pinochet-era constitution, and former president Luiz Inacio Lula da Silva is making a resurgent comeback in Brazil.

But what is causing this? What do these countries have in common? The answer is a rejection of a neoliberal, US-led economic order of “market fundamentalism” which has exacerbated a vastly unequal distribution of wealth, a diminishing of opportunities, and high unemployment – all of which have prolonged disillusionment and left the economies of the continent stagnant over the past decade. Now, the wind of change is here and it’s all happening in America’s own backyard, which it claims as its own but does not tend to the garden.

In many ways, the misfortunes of Latin America have been exacerbated by geopolitics. Since the 19th century, the United States has wielded its “Monroe Doctrine” – a foreign policy approach that prerequisites undisputed dominance over the entire Western Hemisphere as a safeguard for American interests and national security. Such a policy has led to a longstanding approach in Washington to remove and hinder any governments whose preferences do not align with their own, especially socialist ones. This has led to many outright wars, coups and other illicit regime changes, all of which prolonged chronic instability and severely set back many of the countries involved.

As a result, this longstanding lust for political dominance has not been matched with a strategy of facilitating development, investment and growth throughout the continent. The United States has long sought to impose its economic system across the region, but it has not generated growth and prosperity as was marketed, but instead led to the wholesale privatization of assets to US control and “free market fundamentalism,” the erosion and absence of a national industrial and technological base, as well as the creation of small, super-rich pro-US oligarchic classes and a negation of the masses, which subsequently results in mass immigration towards the US itself due to a lack of local opportunities.

When Kamala Harris turned up in Guatemala this week, the message the world heard was “Don’t come,” revealing the otherwise chronic lack of empathy and economic focus Washington has vested in Latin America. It is no surprise on such a background that movements in the south have subsequently arisen, demanding popular change. They are not driven by geopolitical competition, the events in Peru, Chile and Colombia amongst others cannot be explained by Russia, China or Cuba, but a broken status quo and a system which is permanently rigged against them. US neoliberalism in this region is a failed experiment. With the United States now having decided the world’s future is “the Indo-pacific” and Asia, where does that leave South America?

In this case, it will be interesting to see how the US foreign policy establishment reacts to the red wave on its doorstep. Will they perceive it as a national security threat? Will they seek to uproot and dismantle these movements? Or even facilitate coups? Even if they are not driven by any particular geopolitical rival, it is not hard to see why they are for the most part unequivocally anti-American in character given the history, with US flags having been burned in Colombia. Yet even if not, Washington can surely not ignore these events due to their explicit ideological element, which will challenge the popular discourse that East Asia is set to be “the story of the 21st century.” This movement may yet in unforeseen ways have ripple effects on the wider world. The red wave is reimagining South America, and it isn’t over yet.