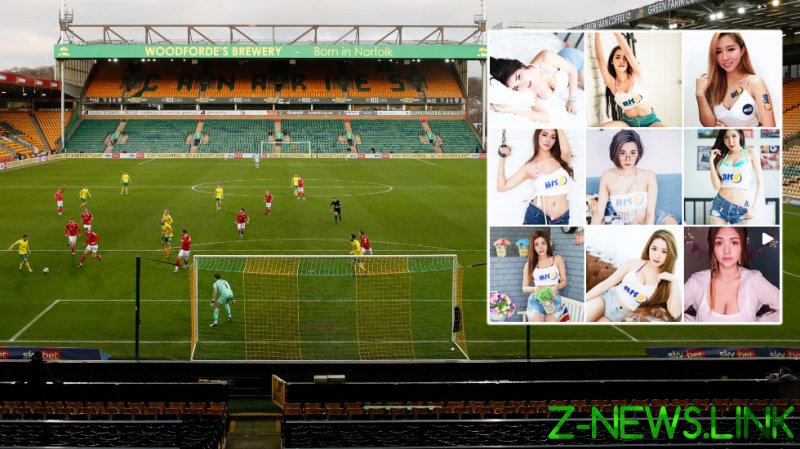 The runaway winners of second tier the Championship last season drew criticism from some supporters after announcing a new deal with BK8, a firm which describes itself as “Asia’s leading online betting agency” and “one of the biggest and most trusted platforms” in its sphere.

Officials at the club, which is majority-owned by British celebrity chef Delia Smith, are said to have “worked swiftly” to remove racey posts from the Instagram page run by the company, which featured images of scantily clad women wearing branded clothing.

A Norwich spokesperson said the club was aware of the “marketing posts” before BK8 later issued a “wholehearted” apology for “any offence caused by our historical marketing”.

“We accept that this form of marketing isn’t befitting of a Premier League partnership,” BK8 said.

“We have immediately removed all marketing material of this nature and will conduct a review of our marketing strategy moving forward.”

While adult content had already been removed from one of BK8’s accounts on Instagram, supporters discovered similar material across other social media accounts featuring women in revealing outfits, as well as a YouTube channel which features females carrying out activities on shows hosted by male presenters featuring clear sexual innuendos.

“Within an hour of the sponsorship being announced, Norwich fans have done more background checks then the whole club,” one unimpressed reader responded. “Shambles.”

“Norwich have had a shocker,” said another. “I have no issues with a betting company, but their online profile is so sleazy and embarrassing.”

On a bumper day of action that many fans were disappointed with, Norwich, who spent a single season in the top flight before being relegated to the Championship again in 2020, sold star player Emiliano Buendia to Premier League rivals Aston Villa for a fee of around $56 million including add-ons.

Robin Sainty, the chair of the Canaries Trust, confirmed that his members had sent numerous pieces of negative feedback over a “PR disaster”.

“It has not gone down well at all, no question about that,” he told the Pink Un.

“A lot of people are opposed to gambling firms and sponsors but I think the key issue in this one is obviously the Instagram account.

“I do not tie it in with the club’s community image that they have been looking to create, or have created. It just seems to be a PR disaster.

“It’s difficult to say, from a layman’s perspective, how it can be reversed without breaking the contract.

“It’s just really bad timing with the atmosphere around the club being toxic because of the Emi Buendia transfer, and then this comes in almost simultaneously, which has made an awkward situation even more awkward.”

Natasha Harpley, who is a district councilor for Sprowston in Norfolk, said: “The club should have looked into it. Do your research.

“Younger people are so used to sexualized images of women on Instagram and young girls are exploited for their sexuality.

“It does not mean us oldies are prudes. It is not being [conservative activist] Mary Whitehouse and clutching our pearls.

“It is not right that women’s bodies are being used to sell things.

“What kind of message do they think this is sending? It’s a club that prides itself on being family friendly and its Kicks programme.

“We are now seeing massive problems with sexual harassment in schools.”

Speaking when the deal was announced, Norwich chief operating officer Ben Kensell accepted BK8 was a “new brand for City fans” and called them “a well-trusted name across Asia.”

“The Premier League has an accumulative TV audience of over three billion and is broadcast into over a billion homes – a huge proportion of these Premier League fans are based in Asia.

“Supporting BK8 in marketing to this global Premier League fanbase equally affords us as a club the opportunity to further our own exposure and commercial efforts into those markets.

“Both the club and BK8 are committed to supporting the ongoing review into betting and sports sponsorship.

“The club continues to adhere to both an internal code of conduct, as well as the policies and guidelines put in place by the Betting & Gaming Council, when carrying out marketing campaigns with betting and gaming brands.

“The industry continues to provide a valuable source of revenue to the club that makes a meaningful difference to our wider objectives as a club.”

City legend Darren Eadie, who has joined BK8 as its brand spokesperson, said the brand “shares the club’s aspiration to seek continuous improvement.”

“It is the undying desire to achieve greater heights in an unforgiving environment that brought us together. We’re all really looking forward to the season ahead with Norwich City back where they belong, in the top-flight.”

His enthusiasm was echoed by BK8 chief Salauddin Sinnakandu, who is said to have been the key figure behind the deal.

“The synergy between the two brands and the voracious appetite to engage the supporters in Asia meant it was a no brainer to bring them together,” he said, adding that the alliance would “help build activation programs in the region for both brands.”