Home / WORLD / A new book tells us ‘We Need Snowflakes’. No we don’t

A new book tells us ‘We Need Snowflakes’. No we don’t 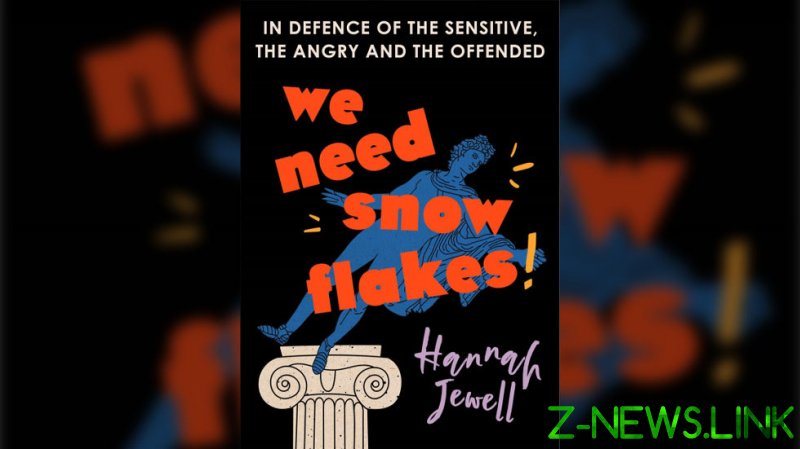 If there’s one cheery takeaway from enduring Hannah Jewell’s recently published ‘We Need Snowflakes’ it must be that her claim the people that pejorative is directed at really don’t like it. Which, of course, is why people bandy the word about in the first place.

“The term snowflake is a weapon to neutralise a challenge to the status quo,” writes the author. “And worst of all, a person who calls you a snowflake is probably not just a good old-fashioned arsehole… they may be something even worse. They may be revealing their membership of or at least interest in the politics of the alt-right.”

And there we have it, in a nutshell. While this is all part of Jewell’s conclusion, it’s also the starting point for her book, subtitled ‘in defence of the sensitive, the angry and the offended’.

Knowing the barb hits its mark, however, is just reward for ploughing through the 270-odd pages of patronising guff from the Washington Post video journalist who sees herself as very much on the ‘right side of history’ and anyone who disagrees with her worldview as not just fundamentally wrong but damaged and even dangerous.

So right-on is ‘We Need Snowflakes’ that two chapters are actually flagged with trigger warnings like: “This chapter deals with awful and potentially triggering things like sexual assault, rape, war, suicide, mass shootings and abuse. Skip to page 209 if you so wish.”

Maybe that could have gone on the opening chapter and saved a few hours spent reading this stuff.

Another warning cautions us that Chapter 7 is filled with “transphobic nonsense.” I’ll say. Because the tired old attacks on Harry Potter author JK Rowling are just that. So too is the assumption that readers agree with the author blithely labelling any woman who dares to question whether a man in a dress is actually a woman a ‘TERF’ (Trans-Exclusionary Radical Feminist).

Reading this, it is clear that a snowflake’s right to call people fascists, TERFs, boomers, racists or transphobes, or simply react with ‘F**k off!’ on Twitter, is without limit and is always right, or in the terms more widely understood in the snowflake realm, a ‘valid response’.

There should be a further warning, maybe in a foreword, for anyone curious enough to tackle ‘We Need Snowflakes’, that the reader should beware that the millennial author has accepted many questionable intellectual positions as fundamental truths.

Just like the Sun rises in the east and sets in the west, the views of critical theory are inarguable. Left equals good. Right equals bad. Intersectionality is a scourge. Gender is simply a fluid social construct. All white people are racist (they just don’t know it). Age does not confer wisdom; in fact, it apparently makes you even dumber. And to call someone a snowflake is not just cruel and unwelcome, it betrays your identity as a reactionary stooge in thrall to fascism.

With a foot firmly planted in the cultural swamp either side of the Atlantic, Jewell regales us with her experience as a hugely entitled university student at progressive ground zero, the campus of Berkeley, California and the somewhat more staid University of Cambridge in the UK where she undertook her Masters.

It’s a university pedigree denied all but the luckiest, but it’s shaped her life and, like so many folk who spent time in privileged further education, she is assured it has given her a unique perspective on the world that regular grunts could only ever scratch their heads over as they search for grubs to eat among the leaf litter on the forest floor.

She tells us that those who bemoan snowflake students and their no-platforming, their safe spaces, their trigger warnings, and their devotion to the rainbow universe are not only wrong and close-minded, but would do well to take a leaf out of the snowflake playbook.

In her telling, ‘snowflake’ is a slur too far with roots in racism, which she goes to some lengths to recount, only to dispel them as irrelevant. She tells us the earliest use of the term was ‘most likely’ in Missouri in the 1860s during the US Civil War. The various factions were the Charcoals, the Claybanks and the snowflakes (not deserving capitalisation, apparently) according to L.U. Reavis is his 1876 book ‘Saint Louis: The Future Great City of the World’.

The snowflakes’ position was anti-war and pro-slavery, a peculiar mix that would confuse their intellectual descendants no end.

This, the author would have it, is all bye-the-bye because the modern-day use of the term emerged from something far nicer. From, well, being nice. Being special. From showing your sensitive side and sticking up for victims wherever you see them, which, if you are a snowflake, is absolutely everywhere.

“We know the term ‘snowflake’ is wielded to distract, to belittle, and to diminish the arguments, identities and political power of young people, poor people, LGBTQ+ people and people of colour,” she writes.

These, Jewell would have, are the victims who need help – “trans and non-binary people whose very existence threatens an old-fashioned understanding of gender.” Really? Jeepers!

“We know it’s a way to ridicule workers who want a fair deal,” she continues. “We know that when a white person is called a snowflake by another white person, it is an attempt to embarrass and chastise them in the hopes they will abandon their allyship.” Keeping tabs on who needs saving must be exhausting.

In order to show the forces of evil at work and just how habitually wronged millennials are, Jewell conjures up some villains. For without them, you cannot have heroes.

So it’s the Marmite man Piers Morgan, far right whack job Milo Yiannopoulos, Harry Potter author JK Rowling, Donald Trump Jr (not so much Sr), Jordan Peterson, and the usual suspects who are lined up against the wall for the snowflake firing squad.

Jewell’s mistake in choosing these baddies is that we all know they represent no one but themselves. While Morgan is not to everyone’s taste, his media persona, like others in his field, is a construct devised to generate clicks, readers, and viewers by winding people up. Ditto Yiannopoulos and, to some extent, Peterson. While Morgan may have a tremendous platform to honk his view, so too does Jewell via her WaPo gig. Why is one so right yet the other so wrong?

This is an immense privilege and entitlement. And it’s from those dizzy heights that the author can condescend to look down on the rest of us and turn out a book telling us to buck up our ideas as a side-hustle while churning out post-ironic videos for her media outlet’s subscribers as a day job.

But to purport that this is a polarised argument of Snowflakes v The World simplifies real world experience and ignores the great majority of ‘In-betweens’ who might laugh out loud at the latest ‘outrage’ trumpeted by the Daily Mail,but also agree that, actually, black lives do matter.

Offence pretence is not a valid tool in attempting to score points in a debate. It just muddies the waters and gives primacy to emotion over any other argument. And while a snowflake might contest that, to the billions of In-betweeners, it’s not healthy.

We might need people who look out for the disenfranchised and the vulnerable who struggle in our society, but do we need patronising books from members of the media and academic elite telling us how to live our lives or temper our language? Er, no, I don’t think so.