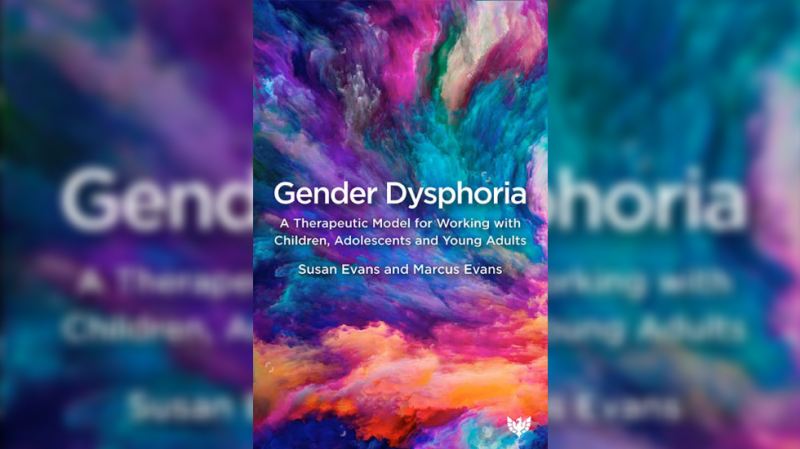 The transgender craze shows no sign of loosening its grip on society. The impact on children and adolescents was discussed empathetically by journalist Abigail Shrier in her superb book, ‘Irreversible Damage’. But what support is there for therapists who work with those young people, in particular those professionals who can see the dangers?

These are scary times. In the UK, a memorandum of understanding (MOU) against “conversion therapy” inhibits counsellors from probing their client’s self-diagnosis of transsexualism. Professionals who should be helping their clients explore and understand their psychological distress are instead expected to affirm whatever their client tells them. Worse, proposed legislation might lead to criminal action being taken against them.

In what is often a febrile environment, a new book by Susan and Marcus Evans examines the situation from a professional viewpoint – the perspective of therapists faced with young clients who have been convinced that they are somehow in the wrong body. ‘Gender Dysphoria: A Therapeutic Model for Working with Children, Adolescents and Young Adults’ is neither “pro” nor “anti” transition. The authors – both experienced practitioners in their field – are cautious, especially regarding young people. They are keen to understand what is happening, rather than merely react to circumstances,

“We understand that to transition is, for some adults, the best way to lead their lives and present to the world,” they write. “Instead, this model concentrates on the individual concerned, to explore and understand what drives and motivates them.”

That is a refreshing approach to gender dysphoric patients, like me. But it was what I experienced 10 years ago; I transitioned before the MOU shackled counsellors to the affirmation model. My own counsellor forced me to consider alternative responses to my transsexualism. At the time I hated it – I wanted to transition and at all costs – but at least I had some idea why I might be doing it, beyond what I picked up on the internet.

At least I was an adult, and able to make informed decisions. The Evans are concerned principally with young people. After spending their working lives in Britain’s NHS, firstly as mental health nurses and latterly as psychoanalytic psychotherapists and clinical lecturers, they speak with expertise and experience,

“The accuracy of mental-health diagnosis in children is notoriously unreliable prognostically, as children change during the course of their development,” they warn. “Children who are diagnosed with one thing at a particular age may turn out very differently when they reach maturity.”

When the gospel of affirmation opens the door to puberty blockers and cross-sex hormones and surgery – delaying and disrupting that development irreversibly – that is a sobering comment. The book exposes the hollowness of this approach: “There can be an excitement around ‘getting onto the hormones’ and a lack of any serious discussion that would usually accompany any treatment programme in medicine that is going to affect the body adversely.”

These authors are experts in their field but they make their case simply and clearly: “What is so often lacking is an exploration of why the person dislikes themselves so much in the first place and locates their discomfort in the gender of their natal body.”

After setting out the theory, the authors then move into a series of case studies. These are fascinating insights into real lives of real people. The analysis that follows each one is clearly explained and would be accessible to a wide audience.

Jane, for example, was a fifteen-year-old girl who was referred for assessment of her gender dysphoria. At the gender clinic, her body language and mannerisms were exaggeratedly masculine: rolled-up sleeves, denim jacket, Dr. Martens boots. She sat in her chair with thighs well apart and a defiant look on her face. She said that she knew she was a man and wanted to transition by taking hormones.

Who told her that she was a man is unclear in the book, but maybe it was unclear to Jane? The theory that we all have an innate gender identity that determines whether we are a man or a woman – or maybe something else? – is as vacuous as it is pervasive. There is no proof that anyone has a gender identity but, worse than that, it is a lazy label that obfuscates the underlying and distressing psychological issues.

Evans and Evans carefully piece together the clinical approach taken with Jane. They recount the difficulties she faced at primary school, where undiagnosed hearing difficulties led to social isolation; how it affected her speech and her studies. How she became more isolated and instead spent time browsing the internet. There she came across ideas about transgender identities, which she felt helped explain why she had experienced all these difficulties.

The therapist neither confirmed nor denied Jane’s ideas but continued to think more widely with her. Jane was not impressed, saying, “What we are doing is a complete waste of time, I know what I need. I just need to be given hormones.”

However, while Jane wanted to cut and run, the therapist was tenacious, telling her: “It is as if you have decided that who you are now is intolerable, and there is no point in talking to me or exploring things. But I think it’s important that we keep trying to understand what’s going on for you.”

Because nobody can cut and run from these sorts of problems, they come with us because they are us. The lie that it is any different has been told so many times that children believe it. Worse, adults who should know better also believe it. Evans and Evans painstakingly analysed Jane’s response to therapy and – with professional expertise – explained it clearly.

There is no simple solution for Jane’s difficulties with life, but human psychology is not simple. We are all complex individuals and each of us has a unique experience of what it means to be human. But together with the other case studies in the book, a picture develops of young people who are in need of being understood, not told that they are somehow born in the wrong body.

This book needs to be read.

Clearly, it should be of interest to professionals working in the field. Whether their professional body – or even the law – allows them to follow the principles suggested in this book is debatable, but they owe it to their patients to push back on the restrictions to their practice. As Evans and Evans assert, “patients with gender dysphoria need services that are protected from political activism; the professionals involved need to be able to work in an environment that is protected from political intrusion.”

Parents and teachers of gender dysphoric children will recognise the behaviours that the authors describe and explain. If we are to help young people in distress, we need to know why they might be distressed. But this book is accessible to a lay readership and needs to be read by a lay readership. Society has a responsibility to children, and we all need to understand what is happening to young people who have been captured by this craze.