Home / WORLD / A new book, ‘Cynical Theories’, finally takes woke warriors to task over crazy ideas such as ‘being fat is the same as being gay’

A new book, ‘Cynical Theories’, finally takes woke warriors to task over crazy ideas such as ‘being fat is the same as being gay’ 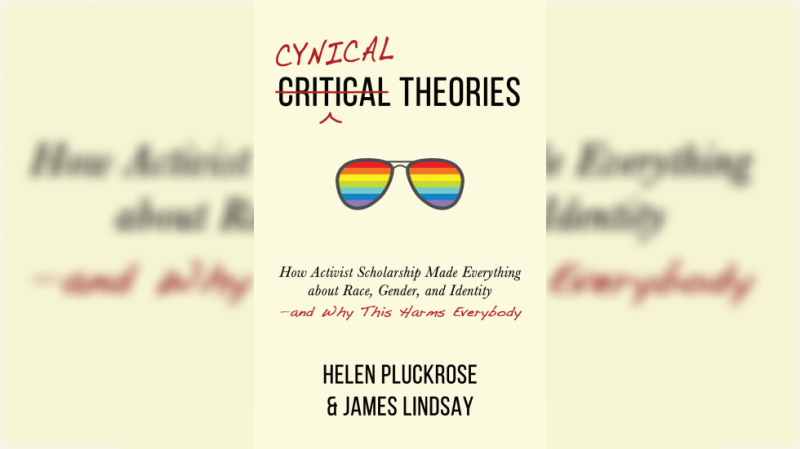 As it isn’t far from home, I feel an urge to visit the London suburb where a local council has permanently painted a pedestrian crossing blue, pink and white to mark the international day against homophobia, transphobia and biphobia. When I find the crossing, I’ll stand in the middle, ignore the busy traffic and wait for a lorry or dumptruck to put me out of my misery.

Then I will be free of this nonsense. The sort of loony, left-leaning liberal virtue-signalling that chooses to waste taxpayers’ money on cosying up to gender fascists. I’ll no longer be able to roll my eyeballs – they’ll be somewhere on the nearby pavement – at Google choosing to censor my docs (like the one I wrote this article on) by offering me pop-up messages suggesting I use the more ‘inclusive’ term of ‘chairperson’ should I ever type the word ‘chairman’. Chairman. Chairman. Chairper… See how it works?

I won’t have to stand by in despair as private members’ clubs, like the Marylebone Cricket Club at cricket’s spiritual home of Lord’s, in London, are backed into a corner by a shouty mob who have manufactured outrage over long-held rituals they now deem unacceptably sexist, leading them to call for a men’s match between Oxford and Cambridge to be cancelled unless a women’s game was included.

And I won’t have to put up with the gender gestapo at LGBTQ+-rights charity Stonewall, the self-appointed language gatekeepers, who bully universities that should know better about who can and cannot appear on their campuses to share their ideas.

In case, like me, you are wondering how we got to this point, where the way we talk, think or act is such a minefield, then please, take a look at the recently published latest edition of Cynical Theories: How Activist Scholarship Made Everything about Race, Gender and Identity – and Why This Harms Everybody.

It might not have the catchiest title, but authors Helen Pluckrose and James Lindsay storm into the debate about modern critical theories with a patient, logical and measured approach that exposes the damage they do to healthy, public discourse. In tackling the presumptions and key ideas behind postcolonial theory, queer theory, critical race theory, intersectionality, gender studies, disability studies and fat studies, they provide a reality check and a grounded insistence that we don’t all have to agree with these views or with the wider system of knowledge they espouse.

They describe in some detail how the rise of academic activism within universities and colleges has moved away from teaching students how to think into teaching students what to think. Any student who questions or objects to their reasoning simply doesn’t understand. There is only one view – the view of the umbrella theory – and it is never wrong and cannot be questioned.

Because of that, the views of academic activists become totally illiberal, which would be a shock to these people, because they truly believe they are the archetypal liberals of our time. Pluckrose and Lindsay make the simple observation that true liberalism is not a closed shop. It doesn’t claim to know it all, and therefore the argument is open-ended. It holds that there are many sides to every argument, and they should all be heard. Some of those views might take permanent hold, others a temporary tenure, and more still can be discarded as just plain wrong. But that doesn’t mean they shouldn’t be heard.

Within critical theory, however, the gatekeepers determine the terms of reference, who is permitted to engage in the discussion and what the result will be. Their decision is final and no correspondence will be entered into. What is happening in our universities and colleges today is not the healthy liberalism – centred neither right nor left on the political spectrum – that many parents wish their offspring to experience in preparation for the adult world.

The authors say that today’s students are being fed an endless diet of critical theories, which are indeed cynical, as the book’s title suggests, and going out into the world not as clear-minded critical thinkers looking at life through a lens of objectivity, but as devoted adherents to rigid ways of thinking.

They are then left free to spread their views in the workplace, which may be an educational institution, where they disseminate their one-world view among malleable young minds. Or, a more recent phenomenon, they enter the public and private sectors, where suddenly everyone’s email signature starts trumpeting preferred pronouns – ‘kind regards Derek (he/him)’ – as employers compete for recognition as gender defenders or friends of fatties, as if that means anything at all.

The default logic is, of course, that, unless you can prove you agree wholeheartedly with this insistent bunch of ragtag theories, then you are inherently racist, homophobic, transphobic, fatphobic, colonialist, and ableist. You just never knew it.

OK, so your company doesn’t discriminate against the LGBTQ+ community, ethnic minorities, the disabled or even the fat, but does anyone really need that virtue-signalled on the company letterhead? Isn’t equality a starting point, rather than something you subscribe to later on by ticking the boxes of various identities?

You have to wonder if those companies that seek endorsement from critical-theory activists really understand what they are signing up to. It takes a leap of faith to adhere to queer theory, which would have us believe there is no such thing as biological sex, and that, despite what the evidence of our own biology might tell us about ourselves, sex is all really just a social construct.

Pluckrose and Lindsay note that, in fat studies, it is held that “calling fat people ‘obese’ medicalises human diversity” and aligns obesity with homosexuality, “reasoning that just as homosexuality has been identified as a naturally occurring phenomenon that does not need a cure, so too must obesity be similarly recognised.” Er, really? Meanwhile, the theory of disability studies says it is wrong to undermine a person’s identity as “disabled” by suggesting they might like a cure, as that’s projecting “ableist norms” onto them. One academic is even quoted criticising disabled people for having “internalised ableism”, for wishing they weren’t disabled.

Some of this critical-theory nonsense is real laugh-out-loud stuff.

And while it has faced little serious challenge in recent years, and many in academia, the media and politics have just rolled over in the face of attack in the public realm and on social media, it is now time to reconsider all this.

There is no point in simply arguing the point. There is no victory to be had. Critical theorists have a fine grasp of social media and how to ‘win’ an argument by rousing the mob against dissenters, so taking them on in that sphere is often disappointingly unsuccessful. We must challenge how the arguments are made and assert our right to oppose them, not the people who make them, as it is too easy to be accused of one of the various ‘phobias’, which works like chum in the water to attract the sharks perpetually circling the debate.

Cynical Theories encourages principled opposition, and it’s a bold stand to take. For those who give a damn, there is something truly encouraging in realising there are genuine ‘liberals’ out there prepared to call out the totalitarianism of critical theory. And it’s about time.