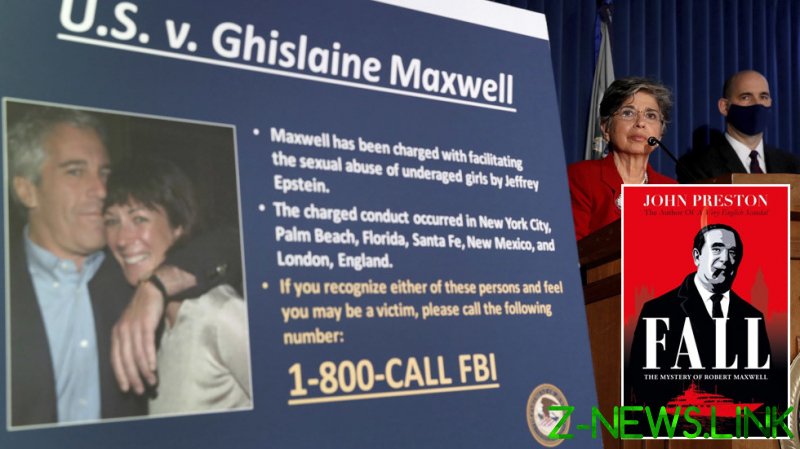 As socialite Ghislaine Maxwell languishes in the same Manhattan jail in which her ex-boyfriend, paedophile financier Jeffrey Epstein, hung himself, a recent biography of her fraudster father suggests the apple didn’t fall far from the tree.

But it’s not her father, the world-class blowhard, bullying conman ‘Captain’ Bob Maxwell from whom her character seems to have stemmed; it’s her mother, the demure and insanely devoted Betty.

The author of The Fall, John Preston, tracks Maxwell all the way back to his birth as Ludvik Jan Hoch in a forgotten backwater of former Czechoslovakia in 1923. It follows him through the various incarnations of his assumed identities – changing his name and spoken language when it suited – through his business career and ultimately to his death on November 5, 1991, aged 68, after he slipped from the deck of his yacht, Lady Ghislaine, into the sea near the Canary Islands.

Arrested as a suspected spy by the Nazis when a teenager, Maxwell fought for the Czech resistance, the French Foreign Legion and, finally, the British where his bravery was rewarded with the Military Cross pinned on his chest by Field Marshal Montgomery. By this time, he had affected a plummy English accent adopted from Winston Churchill, in his lifelong attempt to prove himself worthy of an English establishment that, no matter what his achievements, would never accept him.

In stark comparison to the undoubted episodes of bravery, however, there were also acts of violence and savagery. When the residents of a German town failed to point out the hiding place of a group of German soldiers, Maxwell hauled their mayor out into the town square and executed him.

Yet, somehow, this war crime went unpunished despite a later investigation into the incident. Not that Maxwell ever hid from the murder, with friends and family aware of his military record, warts and all. What must Ghislaine the young child have made of such an act, of which she must surely have been aware?

Maxwell was no stranger to domestic abuse, beating his sons in anger, which too must have been witnessed by Ghislaine, the baby of the family. The message? Don’t upset the big man, or bad things will happen.

While Ghislaine was still a toddler, her oldest brother Michael was in a car accident that left him in a coma. All Betty’s energy went into his care to such an extent that three-year-old Ghislaine confronted her, standing before her to declare, “Mummy, I exist,” in a heartbreaking cry for attention.

It was an unforgiving household for the Maxwell children, with their father flying off the handle at the slightest infringement of his strict rules. But nowhere do you find a sense of their mother protecting them. She seemed more interested in seeking to shore up the love of the man she worshipped, than protecting those expecting her care.

It is not a leap too far to see the same pattern of behaviour exhibited by Ghislaine in her relationship with Epstein, and testified to by numerous young girls she introduced to him. They saw her initially as a protective big sister, but soon realised she was anything but.

In Betty’s own biography, written some years before her death in 2013 at the age of 91 – entitled ‘A Mind of My Own’ – her failure to stand up to Maxwell and her willingness to allow him to dominate her was given as the reason for her passive collusion in the cruelty towards their children.

She denied any responsibility for the misery suffered by those workers who lost out as a result of her husband’s plundering £460 million from his companies’ pension fund, claiming all along that she had no idea what was taking place. She told a Guardian interviewer in 2000, “There is nothing I could have done to alter what happened. I was not involved in his business at all so I didn’t know what was happening.”

That claim echoes down the years in Ghislaine’s denial of wrongdoing as Epstein and his friends trafficked underage girls around the world for sex. A silent onlooker with eyes only for one man, to such an extent that she cannot admit to herself that he is capable of such aberrant behaviour, or the fact that she acted as his enabler.

Paradoxically, Betty found a limitless well of sympathy for the victims of the Holocaust that she never even knew. She became an expert on the subject and founder of ‘Remembering For The Future’, an international organisation dedicated to Holocaust education, despite the fact that she was born and raised a Christian and her husband denied being a Jew for most of his life. Most of the time, it’s recorded, he refused to discuss the fact that much of his family, parents included, perished in Nazi death camps.

But again, Betty’s venture began three years before her husband’s death, when their marriage was pretty much over. It’s easy to see it as an attempt to reconnect with the man she never stopped loving even as he demanded a divorce, and continued with his philandering and relentless cruelty towards her.

The self-abasement she displayed is toe-curling.

Her 70th birthday party at the Dorchester with 150 guests proved a humiliating event, when Maxwell used the toast to regale the guests with his latest machinations in trying to buy the New York Daily News, barely mentioning Betty at all. Once he finished his speech, he simply upped and left for a flight to New York, leaving Betty to listen to the toasts and cut her birthday cake on her own. Whether through indifference or deliberate cruelty, Maxwell’s intent to harm was clear.

In another episode, after her husband insisted that she agree to a divorce, Betty asked Maxwell to spend a few days with her aboard their Lady Ghislaine yacht so they could work out the end of the marriage in a civilised manner.

Despite his pledge to meet her in one port after the other as she sailed around the Aegean Sea, Maxwell never materialised. The emotional torture she must have felt is beyond cruel.

All the time, Ghislaine was seeing what her mother was prepared to do in order to keep the man she loved, learning the lesson that even when such huge personal sacrifices fail to pay off, then the only way forward is continued appeasement, humiliation and denial.

Even though she was a spoiled daddy’s girl, Maxwell showed no lasting affection to Ghislaine. Her photo on his desk, the sole reminder of his family around the office, was replaced by that of an employee’s dog playing with a chew toy that the tycoon had given as a present.

And while he did entrust her with a relatively undemanding role in New York working on business gifts, her forays into her father’s office were as rare as they were uncomfortable.

“She’d go in, give him a big kiss, say ‘Hello, Dad’, and Maxwell as often as not would say ‘Bloody stupid woman – f**k off’. And she’d go off in tears,” recalled former Mirror journalist Nick Davies in the Independent back in 1994 when these things were still fresh in everyone’s minds.

Still, Ghislaine stuck by him. So to witness her refusal to chuck Epstein to the wolves, even now when he is dead and her freedom relies on what she can tell the court about her relationship with the paedophile, you can start to understand the origins of this cult leader-like obeisance.

Not because of what the author of The Fall discloses about Ghislaine’s relationship with her father – there are only a few mentions of Maxwell’s daughter throughout the book – but for what is not recorded.

The reader is eerily aware that Ghislaine is always there, a silent onlooker in the background, as her father’s huge personality dominates and ultimately ruins not only her life, but the lives of her six surviving siblings as well (two of the Maxwell children died years earlier).

Her brother Ian expressed “a combination of exhilaration and being scared” when he heard of his father’s death. He escaped the misfortune of his brother Kevin, who was left a legacy by his father that no son would wish to inherit, becoming Britain’s biggest ever bankrupt, owing £406.5 million.

But Ghislaine was devastated by her father’s demise.

Betty, too, was crushed. But she never turned on her husband. Never uttered a word out of place other than to blame unspecified “defects” for his affairs, fraud and extreme behaviour. Much like Ghislaine with her former lover, Epstein.

“He was enormously intelligent with extreme qualities, and he also had the defects that go with it. But I’m a very loyal person. I don’t abandon my friends when they are in a mess,” said Betty of her husband.

That could quite easily have been Ghislaine speaking of Epstein. These were not values she learned from her father; no, these were handed from mother to daughter, and now she too will pay a heavy price for her unswerving devotion to the monster she loved.

That price, most likely, will be her freedom.