A NASA probe took the unique dunes on Mars 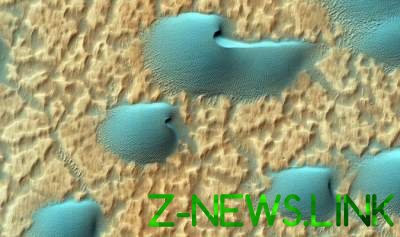 This is truly an unusual phenomenon for the planet which is called red.

The photograph shows the dunes of bright blue in the middle of the red Martian landscape.

The image was processed, so that the audience could better examine this feature of the planet in General, however, NASA experts say that the dunes are really blue.

The matter of which they consist differs from the surrounding rock.

HiRISE is one of six scientific instruments of the probe. Images were obtained in January, and processed just now. Sand dunes are one of the most common characteristics of Mars, they are unique indicators of the interaction between the surface and the atmosphere of the planet.