Home / WORLD / A murder epidemic, migrant crisis & economic meltdown at home… but STILL the US meddles in the world’s affairs

A murder epidemic, migrant crisis & economic meltdown at home… but STILL the US meddles in the world’s affairs 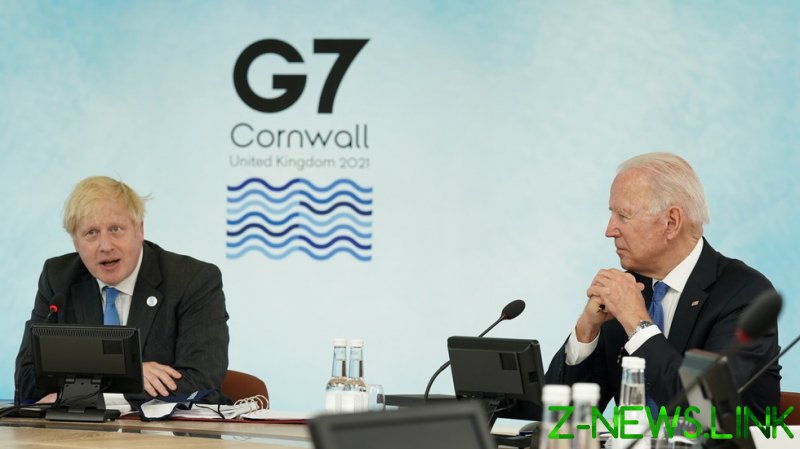 US President Joe Biden is attending the G7 summit in Cornwall, England, and his vice president, Kamala Harris, has this week been in Mexico and Guatemala. Even before he arrived in England, Biden had already made clear his intention to meddle in Britain’s affairs. He let it be known that he would tackle Prime Minister Boris Johnson about the Northern Ireland Protocol and the protracted post-Brexit negotiations with the European Union.

Biden failed to broach the subject during Thursday’s meeting with Johnson, but he will no doubt return to it before the weekend is over. Similarly, on her visit to Central America, Harris berated her hosts for corruption and told would-be Guatemalan migrants not to try and get into the US, because “if you come to our border, you will be turned back.” Fine words indeed from the vice president, but unfortunately not based in reality.

Instead, I would suggest that rather than lecturing other leaders how to run their respective countries, Biden and Harris should take a look in the mirror, because all is not well in the US at the moment.

Firstly, America’s largest cities are in the midst of a murder epidemic. The homicide rate in Chicago, for example, is eye-wateringly high. Last year alone, there were 750 murders in the ‘Windy City’, which represents a jump of 50% on 2019. These increases in homicides were replicated in all of the US’ most populated cities. There were, for example, 437 registered murders in New York, a 40% increase on 2019, and also 322 killings in Los Angeles, a leap of 30%. This year, things are only getting worse, as homicide rates are already up 24% in comparison to 2020. Take Philadelphia for example, where there were 170 murders by May 9, a rise of 28% on the same period last year.

Violent crime is also an increasing problem in American cities. Detroit remains the most dangerous city in the US, where there is a staggering 1-in-51 chance of being the victim of a violent crime. St. Louis has similar astonishing violent crime statistics, as do Memphis and Baltimore. Indeed, there were 55 shootings last weekend in Chicago alone. And one thing all of these crime-ridden cities have in common is that they are run by Biden’s party, the Democrats.

Added to Joe’s woes is the fact that the US’ southern border is under massive pressure due to the number of migrants coming over from Mexico. Trump attempted to stem the tide by building a wall and implementing a ‘Remain in Mexico’ policy, which was partially successful. One of the first actions of the Biden administration, however, was to ditch these. In an attempt to get a handle on the increasingly desperate situation, Biden dispatched Kamala Harris – who has not even bothered to visit the border – down to Mexico and Guatemala. Harris warned Guatemalans, “Do not come. The United States will continue to enforce our laws and secure our borders.” It is fair to say that her visit was not well received, and nor will the Guatemalans take any notice, primarily because mixed messages never work.

On the one hand, Harris is attempting to convince migrants not to attempt to breach the border, while at the same time Biden’s policies are making it easier for migrants to cross the border. This has unsurprisingly infuriated those who live in the border states, particularly Texas. Governor Greg Abbott stated that “this problem will continue to get worse because of the policies that have been adopted by the Biden administration.” He also encouraged Biden to reinstate Trump’s ‘Remain in Mexico’ policy and “continue to build the wall along the border in south Texas.” Neither of these suggestions will be taken on board by Biden and Harris, and as a result the migrants, who are themselves victims of people-smugglers, will continue to come in their droves.

Finally, Biden will soon have to contend with economic problems, partially caused by the Covid pandemic. On Thursday, it was announced that inflation in the US had risen by 5% in the past month, the largest increase since August 2008. The price of cars and trucks, for example, has jumped in price by a whopping 7.3%. If inflation continues to rise at this pace, then American workers will find price hikes outstripping wages; and of course, the worst hit will be the low paid.

Added into this toxic economic mix is the fact that the US is a country increasingly living off debt. It has an astounding $30 trillion of national debt, coupled with a $1 trillion annual deficit. The US debt level now rivals Italy, which has been tinkering on the brink of economic collapse for years. The debt situation in the US cannot go on forever and the economic balloon will eventually pop. And when it does, we will all suffer the consequences because, as the saying goes, ‘When America sneezes, the world catches a cold.’

So, whilst Biden and Harris introduce themselves on the world stage and tell other countries how to run their affairs, it would, I suggest, make more sense if they focused on their own problems. With a murder epidemic, the southern border out of control, and growing economic problems, I am not sure anyone should be taking advice from this pair.

Moreover, Biden has no right to poke his nose into British affairs, although the mainstream media seem to suggest that he can because his ancestors were Irish. Well, if this logic is applied, then Boris Johnson – who was born in New York and held dual nationality until 2016 – has even more right to tell Biden to get his own house in order first.