Home / WORLD / ‘A miracle if his back survives’: Golf hulk DeChambeau baffles fans with crazy speed-swing tee shots ahead of US Masters (VIDEO)

‘A miracle if his back survives’: Golf hulk DeChambeau baffles fans with crazy speed-swing tee shots ahead of US Masters (VIDEO) 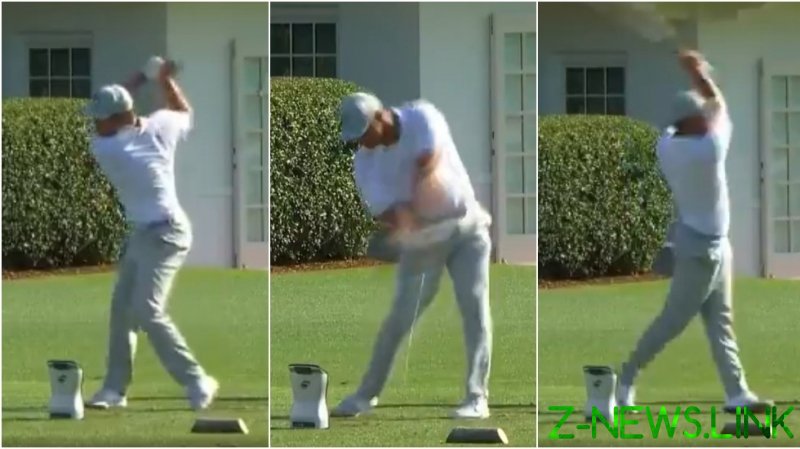 World number 5 DeChambeau is preparing to take on one of the world’s most famous and formidable courses this week, and treated fans and fellow pros to a glimpse of the punching power he has off the tee during a warm-up session.

The 27-year-old American was seen firing off a series of drives in quick succession, astonishing fans in a video which soon went viral.

As DeChambeau ripped through his practice swing, commentators were head exclaiming: “He has hit 140mph swing speed… 211mph ball speed.”

Fellow pro Vijay Singh was seen watching on in astonishment, with the pundits joking: “If I was Vijay, I’d sit there and watch that for giggles too.”

“He’s hit more balls in the last minute than Fred Couples did in the last hour,” joked a fellow commentator, with another adding: “I’d be in hospital if I tried this.”

Fijian star Singh – who won the 2000 edition of the Masters – also chimed in on social media, joking: “Told him he wasn’t swinging fast enough.”

Some fans watched DeChambeau’s contortions and wondered how long his back could handle that kind of strain.

“If his back survives the next 10 years it will be a miracle of science,” wrote one pundit.

DeChambeau has famously bulked up in a bid to give him the edge over the competition, also pursuing other marginal gains that could put him in front of the field.

His efforts have seen him dubbed “the mad scientist” of the golfing world, but paid off when he claimed last year’s US Open title.

This year at Augusta, DeChambeau has said his power could be the key for him.

“There are many holes that can be helped with the distance,” the star said in the build-up to the start of the tournament on Friday.

“Hopefully the length will help on the par-5s, some par-4s, There are holes where I’ll be taking a more aggressive line than last November.”

He noted, however, that the notoriously quick greens at Augusta would mean poise as well as power.

“Chipping and putting is always key around here,” DeChambeau said. “You have to roll the ball well.”