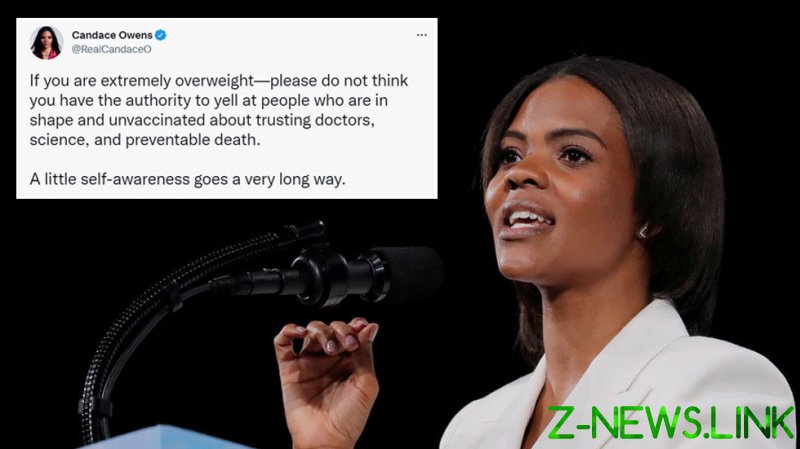 In a tweet on Sunday evening, vaccine skeptic Candace Owens sparked fresh debate about Covid-19 shots as she called on overweight people not to lecture the unvaccinated on matters relating to health and the pandemic.

“If you are extremely overweight – please do not think you have the authority to yell at people who are in shape and unvaccinated about trusting doctors, science, and preventable death,” Owens wrote, adding that “a little self-awareness goes a very long way.”

Unsurprisingly, Owens, known for her frequent controversial takes, has received plenty of criticism for isolating overweight people – but plenty of others appeared to agree with her.

Some praised her for raising the issue of obesity. “Couldn’t have said it better myself. Obesity is a very real health issue in the USA,” one person wrote. “Truer words were never spoken,” another contended.

Republican congressional candidate Omar Navarro simply responded by posting a photo of overweight Democratic governor J.B. Pritzker. The caption reads, “J. B. Pritzker wears a mask to show you how serious he is about his health.”

Another Twitter user posted a meme from Family Guy, showing the vastly overweight main character Peter being transported on a forklift truck. The caption reads: “Americans on their way to get the Covid jab so they can be healthy.”

One person asked how it’s become ok to “vax-shame” but it’s not ok to “fat shame,” and adding that if people took care of themselves, maybe health insurance wouldn’t cost so much.

Some suggested the issue wasn’t so simple or a legitimate comparison, however.

One Owens critic noted that “obesity isn’t contagious,” and that it takes a lot of time to lose weight, whereas anyone can get the vaccine immediately. “Getting the vaccine is the easiest thing you could do and has benefits for others,” one wrote, adding that “losing weight is an arduous process.”

“Getting a vaccine for a communicable disease affects the health of everyone around them,” one person chimed in, noting that vaccines and obesity are “not really comparable.”