A fatal truck collision in new York has called the attack 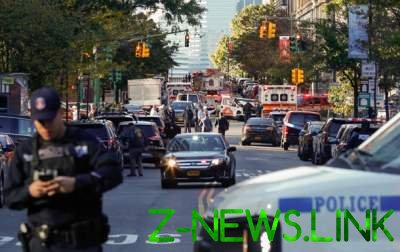 According to media reports, the FBI is also considering the attack as a terrorist act.

The mayor of new York bill De Blasio called the incident with the truck a terrorist attack.

“On the basis of information available up to this point, it was an act of terrorism, a particularly vile act of terrorism”, − said the mayor at the briefing.
“Eight innocent people lost their lives, more than a dozen wounded,” said De Blasio.

See also:  In the center of Moscow there was a mass collision of cars

CNN TV channel with reference to representatives of the authorities reported that the collision of the truck are investigating as a terrorist act.
“The FBI considers the attack as a terrorist act”, − stated in the message.

According to police, the suspect committing the collision was arrested and is in custody.
Law enforcement said that “a suspect (after being run − ed.) got out of the car with fake firearms, the NYPD shot him”.

We will remind, in new York, a truck drove onto a bike path in the southwest part of Manhattan. The driver drove a few streets, knocking on the way the cyclists crashed into a school bus, and then came out brandishing a firearm. In the incident eight people were killed and over ten were injured.