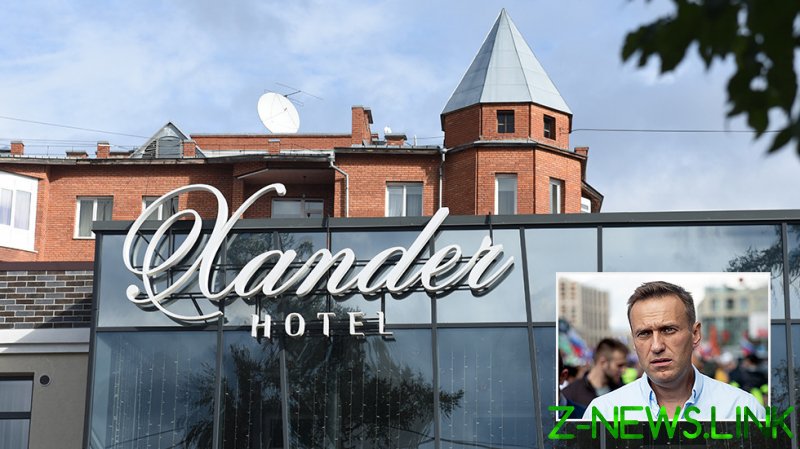 The slightly bewildered-looking man who closed the door in their face is at the center of a new investigation published on Monday by US government-funded digital investigations outfit Bellingcat in collaboration with CNN, Germany’s Der Spiegel, and Russia’s the Insider. They claim that his footprints lead all the way from a bar in the Siberian city of Tomsk to the desk of Russian President Vladimir Putin. In a slew of allegations, it is said that Navalny was tailed for years by a top-secret team of agents from Russia’s domestic security agency, the FSB, and it was they who attacked him with a military-grade nerve agent.

Furthermore, after he was taken ill on a flight to Moscow the next day, the same team supposedly gave the comatose activist a second dose of lethal Novichok as he was laid up in the hospital. Somehow, according to a separate splash in the UK’s Sunday Times, Navalny had not one but two brushes with what researchers say is the deadliest substance ever made, but has lived to tell the tale.

“Bulls**t.” That’s the fairly blunt verdict Kremlin spokesman Dmitry Peskov delivered concerning the earlier expose, when asked on Monday. “The Sunday Times is to be read on a Sunday in a dressing gown,” he added mockingly; “there’s false information, and then there’s this.” Navalny himself was getting dressed, according to the report in the Sunday Times, which alleged that the poison was “probably” placed on the underpants he put on in the hotel.

Bellingcat’s new allegations seem to contradict the Times’ sensational tale. According to them, Navalny ordered a Bloody Mary in his hotel the night before his flight. But, when the barman said he didn’t have the necessary ingredients, the activist settled for a Negroni. However, it is now implied that besides the gin and vermouth, there was a splash of something much more bitter. “The cocktail tasted like the most disgusting thing I’ve had in my life,” he told the investigators, claiming he only took one sip.

The confession that the Moscow protest leader might have partaken in a ‘Novichoktail’ seems at odds with claims from his press secretary shortly after the incident, when she insisted “he drank nothing” the night before. His team has long claimed that the deadly poison had been slipped into his morning tea at the airport the next morning. The story was then later changed, and a water bottle found in his hotel room was blamed after it was taken to Berlin for analysis.

If the sip of Negroni was the source of Navalny’s ordeal, it’s also hard to understand how it took somewhere between 10 and 14 hours to work, after a full night’s sleep, before suddenly leading to violent convulsions on a plane the next day, and collapsing into a coma.

The crux of Bellingcat’s investigation, which puts Putin himself at the top of the chain of command, is that records taken from one of Russia’s cell phone networks pinpointed the alleged FSB agents within a short drive of Navalny in Tomsk. Apparently, they had tailed him before on dozens of trips around the country, but they chose this one to make an attempt on his life.

How the online activists, many of whom say they are volunteers, got hold of that data in the first place is now the subject of much speculation. In an interview with liberal Russian broadcaster Echo of Moscow on Monday, high-profile liberal journalist Oleg Kashin said that while this kind of personal information, when it comes to normal folk, might be accessible to those who know how to look for it, getting the GPS location of FSB agents inside Russia is hardly something that amateur investigators would succeed in doing. He added that even black marketeers selling this kind of information online would draw the line at exposing security officials.

Former Russian member of parliament Sergey Markov previously claimed that “Bellingcat looks very much like the information warfare department of MI6 to me.” He added that he believes “very professional people are working on their falsifications.” The group previously came under fire for moving away from its original stated intention of using only open-source material, admitting to relying on so-called “confidential human sources” in their investigation into the alleged poisoning of Sergei and Yulia Skripal.

Bellingcat’s latest supposed sting will do little to dispel suggestions that its team is working closely with intelligence agencies. According to Michael Schwirtz from the New York Times, “a senior German security official says the report aligns with what CIA and MI6 quietly provided the German government months ago.”

If Bellingcat arrived at the same conclusions independently, they are clearly giving global spy agencies a run for their money. What is more, they’re good value as well – while the outfit is coy about its funding, some of which is known to come from the US government, it is unlikely to have the access and assets of MI6, which takes a large cut of the $3.5 billion of taxpayer’s cash committed to Britain’s intelligence budget each year.

Given how closely Bellingcat’s investigations align with Britain’s geopolitical objectives, and appear to be overwhelmingly targeted at Russia, the idea that the outfit is colluding with Western spooks feels all the more plausible.

Wherever they come from, the revelations have stirred Western media into a frenzy. It’s also worth noting that if similar information was coming directly from spy agencies, without the kind of hipster filter Bellingcat provides, it would be far more difficult for media outfits to take them at face value. Naturally, it would also be a harder sell for the general public given the tarnished reputation of British and American spooks over the past two decades since they provided false intelligence to drag their countries into the illegal Iraq War.

When Clarissa Ward and CNN’s news team pitched up to the home of the man Bellingcat claims was behind the events in Tomsk, they got the footage they were after – a door closing on reporters. But, as analysts begin to mark the investigators’ homework, the question of where they are getting their facts from remains wide open.