Home / business / A dam in a flooded Tulun was built by the father of the Governor of the region. The officer took it

A dam in a flooded Tulun was built by the father of the Governor of the region. The officer took it 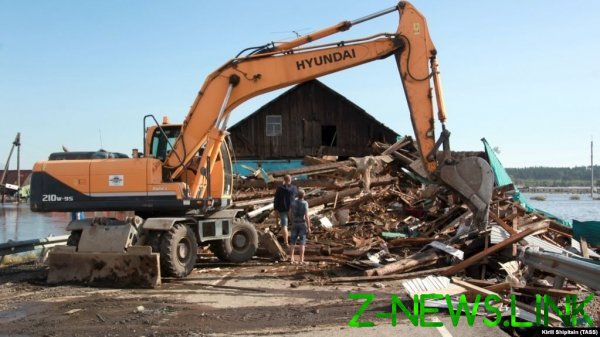 To protect the city of Tulun from flooding had the dam built on the river Iya. Work from 2007 to 2009 was led by a company whose Director was Mykola Bolotov. His son, Ruslan Bolotov, at the time of completion was the Minister of the regional government and was responsible for all construction in the region. Now Ruslan Bolotov – head of the government of Irkutsk region Deputy Governor.

According to the latest data, victims of flooding in the town of Tulun of the Irkutsk region were at least 20 people, said the head of Ministry of emergency situations. Missing are eight residents, including one child.

Flooding began on Wednesday, June 26. The water flooded the town of Tulun. Flooding reported in six districts of the region – Nizhneudinsk, Taishet, Tulun, Chunskiy, Zima and Kuitun. Came from the banks of the tributaries of the Angara river – major rivers UDA, Biryusa, Ia, Chung and Time.

The city of Tulun stands on the river Iya and regularly suffered from floods. In 2006 harajatlari twice: damaged hundreds of houses, people evacuated. It was after this it was decided to build in Sochi a dam.

“The unpredictable element: the river can flood at any time. The task of the authorities – to do everything to avoid dire consequences in the future,” – said in 2008 the mayor of Sochi Victor Piven.

In 2006 Tulun included in the Federal program “Protection of population from floods and strengthening the coastline”. A dam built three years. The money was allocated from the budgets of all levels. The total cost of construction – around 51.5 million rubles.

In 2009, construction was suspended for lack of money. The locals even organized a vigil on the river Bank –ؘ are watching the changes in the water level.

When the dam construction was completed, the regional government reported:

“As a result of capital repair of hydraulic structures the city area is occupied by residential and industrial buildings protected from flooding in flood period.

Potential prevented damage amounted to 454 million rubles, the area of protected areas was 63 hectares, number protected population of 1837 people, the number of large objects of economy and infrastructure, located in a protected area – 2″.

Official “Oblastnaya Gazeta” wrote that the construction of the dam led the winners specialized enterprise “Repair of buildings” from the city of Shelekhov.

“I think all these engineering works will enable to eliminate 100 years, not less, flooding in Sochi. This is the target set by the Federal program,” – said the Director of the enterprise Nikolay Bolotov in interfluviales TV channel “Russia”.

Bolotov was a member of the party “Fair Russia”. In the obituary on the website of the party says that his business has changed significantly over the years – instead of the company “Repair of buildings and structures” created by several separate companies: JSC “UK” rzs, Training center “Rodnik”, LTD “Information-consulting center “Consulting-invest”, LLC “Revival”.

And now look at the biography of the Governor of the Irkutsk region Ruslan Bolotov Nikolaevich.

In 2003 he, along with Mykola Bolotov became a founder of CJSC “Management company “Russian grain Union” – it is mentioned in the list of companies above. The organization is involved in utility service of residential homes in Shelekhov.

See also:  "Like a fussy little pigs": in a Network there was a scandalous roller with participation of Putin

“In the management of CJSC “Management company “Russian grain Union” is more than a third of the housing stock of the mountains. Shelekhov – an apartment house district 1, 7, 1, 11, 18 blocks with a total area of 350 thousand square meters”, – said on the official website of the company.

In the directory “who is Who. Status the elite of the Russian Federation” on Bolotov said that before 2004 he worked as General Director of the enterprise “Repair of buildings and structures” in the town of Shelekhov.

That is Ruslan Nikolaevich marsh — son of Nicholas Bolotov, who led the construction of the dam, and started his career as a partner with his father in business. The same data has the local edition of “Бабр24”.

When the dam was built and put into operation, Ruslan Bolotov has not worked as the CEO of the firm his father, and was Minister of construction and road economy of the Irkutsk region.

The maximum height of the water, which was calculated at the dam is 12 meters. On 26 June, the water exceeded this mark.

Now Ruslan Bolotov as the Deputy Governor of the Irkutsk region and the head of the regional government manages the distribution of financial assistance to the victims and control the rising prices in the disaster area.

On sent to the government of the Irkutsk region request This Time Ruslan Bolotov did not answer.