Home / WORLD / A Covid death toll of 124,000, £2 trillion in debt, hellish prisons, education in chaos… but Boris and his team get rave reviews!

A Covid death toll of 124,000, £2 trillion in debt, hellish prisons, education in chaos… but Boris and his team get rave reviews! 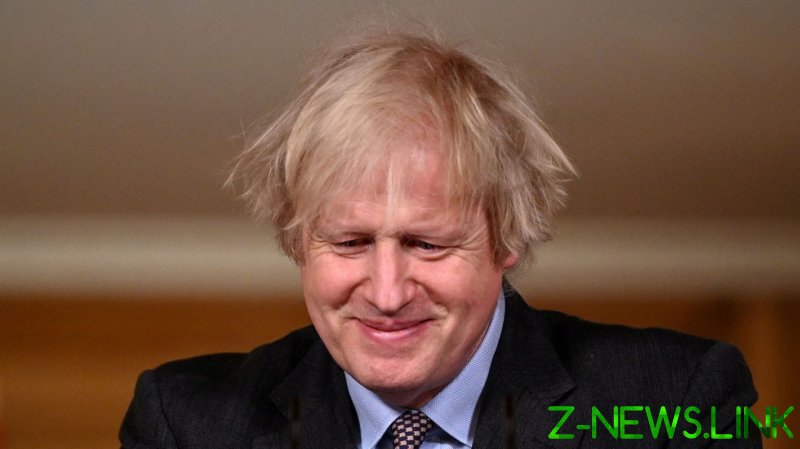 Parallax error is a miscalculation in measurement due to competing lines of sight. The point you are looking from might not be the same as someone else’s. That’s now the situation the UK finds itself in politically.

The country’s ‘leading Conservative blog’has published net satisfaction ratings for the government and other high profile figures. The polling is independent of the party, although it clearly comes from supporters. But that doesn’t diminish the stark results. The only minister to receive a negative rating was Education Secretary Gavin Williamson, due to the fiasco around exams and school closures; the rest are resoundingly positive.

Liz Truss came on top with +86.8 percent. The Secretary of State for International Trade has received a lot of attention lately for negotiating the removal of Trump tariffs on UK products like Scotch whisky and Stilton cheese. This eye-catching deal pales into insignificance next to the UK’s five biggest business groups issuing warnings that Brexit is causing them more problems than Covid-19. In January, exports to the EU were 68 percent lower than the same month in 2020. A survey of small and medium-sized businesses showed that two-thirds have seen negative prices in their supply chain since Brexit.

Second place in the roll of honour goes to Rishi Sunak, who recorded a +74.4 percent approval. The chancellor delivered his budget on Wednesday and was forced to extend furlough until September at a cost of £65 billion. But three million people are either not covered by help schemes or ineligible. They are being left with no recourse and have either met, or are facing, imminent financial ruin.

Rounding out the ‘Conservative Medal Podium’ is Dominic Rabb, the foreign secretary, who takes bronze. His major activity recently has been to announce that Britain is slashing aid to deserving causes worldwide. Yemen will get “at least” £87 million, down from £164 million last year. It’s seen by some as a travesty that the fifth-largest economy in the world is cutting aid to a place where two million children are acutely malnourished. This is exacerbated by the government’s approval since July 2020 of £1.4 billion in arms sales to Saudi Arabia, the major aggressor in the conflict that has devastated the nation.

Prime Minister Boris Johnson was awarded a rating of +55.7 percent. Granted the rollout of Covid-19 vaccines has been well-handled with 22 million people successfully treated so far. But the prison system is in chaos with the number of convicts on suicide watch increasing by 60 percent since 2010. The nation’s nurses are preparing to strike over being offered a one percent pay rise. The fragility of millions of families is being laid bare by calls that extending the £20 increase in universal credit isn’t enough and that the whole benefit system needs to be overhauled to help those in poverty. The demand for food banks has rocketed since the pandemic hit.

However, Boris’ main activity this week has been an apparent attempt to create a charity so he can take donor money to finance a £200,000 refurbishment of his official residence, as he and fiancee Carrie Symonds reportedly don’t like its current modern style.

And Home Secretary Priti Patel’s (+50.5 percent) alleged bullying of a former civil servant meant taxpayers have to stump up £340,000 in compensation plus legal costs.

Most of the above points have arguable angles depending on political persuasion. No democratic government will ever please everyone, supporters or not. But this poll is disturbing.

The rapturous approval of Britain’s current government is at odds with basic facts. The country has recorded the most Covid-19 deaths in Europe: 123,783. Many experts have expressly blamed this excessive figure on incompetence by the authorities. The prime example is £37 billion spent on the Test and Trace system, which scientists described as having a “marginal impact” on falling rates of Covid-19, and have been marred by a litany of cock-ups.

Dido Harding was a strange appointment to head up the scheme; her previous jobs have been CEO of mobile phone company TalkTalk and being on the board of The Jockey Club, the organisation that held the Cheltenham Gold Cup last March despite warnings from health professionals. That event drew a combined crowd of 250,000 across four days and is thought to be the cause of a local outbreak in pandemic deaths.

There’s also Wikileaks founder Julian Assange, who is being trapped by the justice system in Belmarsh Prison, even though millions of Britons feel he should be set free and not offered to America despite their extradition request.

All of these issues together mean it’s impossible to see how the Conservative party have recorded rave reviews. The only explanation is that Britain has irreversibly entered an ‘Us and Them’ scenario. It’s a mirror image of what happens across the Atlantic: Republican or Democrat. Generations vote the same way as their parents did, as that’s the way it is. Policies or previous records don’t matter, it’s Red or Blue. Britain is now in that territory.

How can anyone offer such strong backing for the current government? Even if you think Boris is the best person to be prime minister and feel the same about Sunak as chancellor, no objective and questioning public can award them these ratings. It’s disingenuous.

This cannot be dismissed as something trivial. It looks like the beginning of extreme voter tribalism. When you remove the inclination to question, to probe and to judge with an open mind, you have the hallmarks of a failed democracy. It’s on the basis of this evidence that Britain’s population is putting personal political identity over the good of the nation.

None of us should ignore that.