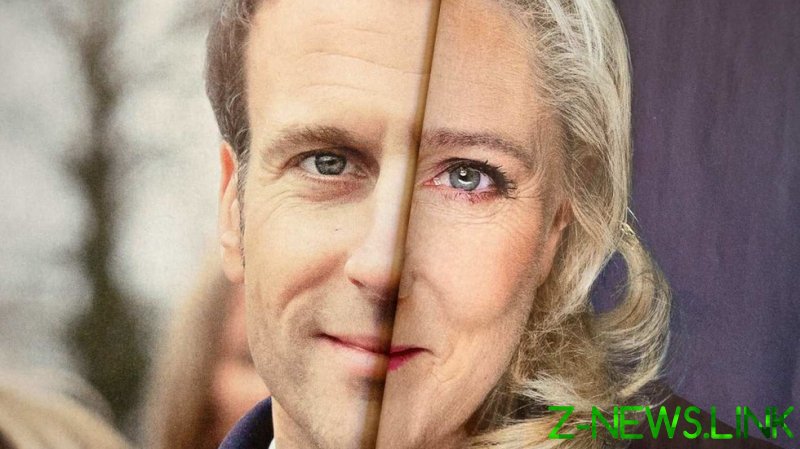 When French voters head to the polls on Sunday to choose their next president, will the result mirror that of the 2017 election? Five years ago, the same Macron-Le Pen matchup resulted in a blowout, with Macron winning with 66% of the vote against Le Pen’s 34%. The perennial phenomenon of the French “Republican Front” struck again. In other words, all other first-round voters cast their ballots against Le Pen rather than for Macron. Older French voters in particular have an inherent fear of the “far right,” and overwhelmingly vote reflexively against it. But why is this the case?

It all started when the predecessor of Le Pen’s National Rally party – the National Front, led by her father, Jean-Marie Le Pen – benefited from former Socialist French President François Mitterrand’s openness to smaller parties’ electoral participation in the 1985 legislative elections, and ended up winning 35 seats in the National Assembly. Mitterrand has long been accused of opening the doors to the corridors of power to the far right as a clever ploy to permanently divide the establishment right, thereby ensuring many years of dominance by his conventional left Socialist Party.

But much has changed since then. The conventional right and left have both fully imploded. After failing to obtain the minimum 5% of votes necessary for state reimbursement of campaign expenses in the first round of this year’s election, conventional right Republican Party candidate Valérie Pécresse is currently appealing for donations from the French public to avoid having to cover €7 million worth of expenses (including €5 million from her own pocket). On the traditional left, the Socialist Party led by Paris Mayor Anne Hidalgo only mustered 1.7% support. 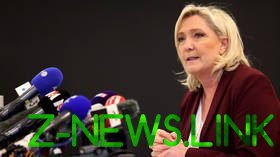 Today, Macron has cobbled together conventional figures from both the right and the left and successfully branded them as centrist and pragmatic defenders of the French and European establishment status quo. Not that the French are thrilled with his performance. Polls consistently show Macron’s popularity hovering around 40%.Macron’s approval is highest among retirees and lowest among young people ages 25-34, according to an Odoxa poll, and also among the non-executive working class.

This should hardly come as a surprise since the figures reflect the impact of the two biggest crises that Macron has managed during his first five-year term: the Covid-19 pandemic and the Ukraine conflict. Retirees are the least negatively impacted by – and arguably the biggest beneficiaries of – Macron’s heavy-handed pandemic management and vaccine mandates, which have resulted in working-class job loss for noncompliance. The older demographic is also unaffected by Macron’s vow to raise the retirement age to 65. They’re more risk averse and susceptible to the suggestion, often cited by analysts in the French press, that a vote for Le Pen could bring political instability and unforeseen consequences for both France and for Europe. Meanwhile, younger, working people with families are feeling the pinch of Macron’s policies which have helped antagonize Russia over its military operation in Ukraine in the absence of a plan to manage the blowback to the French and EU economies as a result of anti-Russia sanctions.

Younger and working-class French voters are therefore more willing to take a risk on something new, given Macron’s evident failure to mitigate chaos over the past five years.

According to a new Democracy Institute survey of French voters, the most important issue for them, by far, is inflation, with more respondents disapproving of Macron’s handling of the Ukraine crisis that has contributed to it, and more than half asserting that the European Union sanctions against Russia, championed by Macron, hurt France more than they did Russia. Only 20% of respondents consider Russia to be “the greatest threat to France” (with China and terrorism ranking ahead), and more French voters agree than disagree with Le Pen’s position that France should re-exit the NATO integrated command. 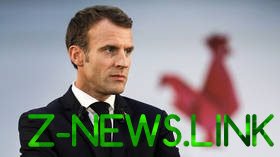 So, in reality, even with older voters overwhelmingly backing Macron, Le Pen’s more unconventional and non-establishment postures are nonetheless seducing French voters who aren’t thrilled about Macron’s leadership, particularly in the economic realm.

Scandals are also playing a role in the waning days of the campaign. Macron has been attempting to justify the increased use of global “big consulting” firms by the French government under his leadership, to the tune of hundreds of millions of euros of taxpayer funds, according to a French senate report. These facilitators of globalism advised the French government on Covid vaccines while also representing big tech and big pharma vaccine makers, for example. It’s not difficult to imagine how such conflicts of interest can result in government-imposed mandates that favor special interests over science to the detriment of democracy and basic freedoms.

But Le Pen is also facing an inconvenient disclosure ahead of the final round. The European Union’s fraud agency has just accused her of misusing public funds during her time as a Member of the European Parliament. The move is the culmination of an investigation that has been dragging on for years, which has raised suspicions about political motivations over the timing of the announcement.

Le Pen is known for her pushback against supranational top-down EU governance – in contrast to Macron’s cooperation with it – and has been consistently outspoken about the need for France to regain more independence and sovereignty. Her far-left opponent, Jean-Luc Mélenchon of the France Unbowed party, has a similar position to Le Pen’s on the EU. And if all of his first-round voters backed Le Pen in a grand anti-establishment coalition to defeat Macron, it would cause a political earthquake. Both candidates have insisted on lesser blind cooperation with the EU to the detriment of French citizens, while Macron has spent the past five years behaving like its greatest cheerleader, all while refusing to protect the interests of its citizens from the impact of American military and economic ambitions. 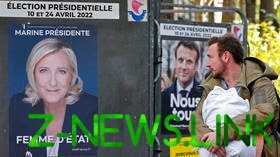 Both Mélenchon and Le Pen also converge on the need for less obedience to Washington. Mélenchon favors a socialist safety net while Le Pen has gradually been moving towards more laissez-faire policies that achieve similar results with less government interference. For instance, while Macron favors government-issued “cheques” to offset increased energy and food prices, Le Pen has vowed to reduce sales tax on such items in order to leave more money in consumers’ pockets.

Yet, despite the similarities in their objectives, Mélenchon has called on his backers not to give Le Pen a single vote in the second round. His longstanding view is that Le Pen – who is against Macron’s Covid mandates and has come out against Macron’s position of arming neo-Nazis in Ukraine – must be opposed at all costs. As a result, 30% of the votes from Mélenchon’s close third-place finish to Le Pen’s second-round qualification (22% vs 23%) are projected to go to Macron, according to a new BVA poll, compared to just 18% to Le Pen. An estimated 52% of Mélenchon voters either plan to abstain or cast a blank ballot in the final round.

And it’s precisely this abstention, blank, or undeclared vote where this election could play out. According to the Financial Times’ weighted average of all polls available to date, just 7% separates Macron from Le Pen heading into Sunday’s vote. So, it looks like the result may ultimately come down to voter motivation. Will French people over the age of 65 who view Macron’s conventional approach be more motivated to go vote in order to maintain the status quo at any cost, despite disappointment with the general direction of the country? Or will younger, working-class voters mobilize to seize the right to try something new with the only chance they’ll have to do so for the next five years?