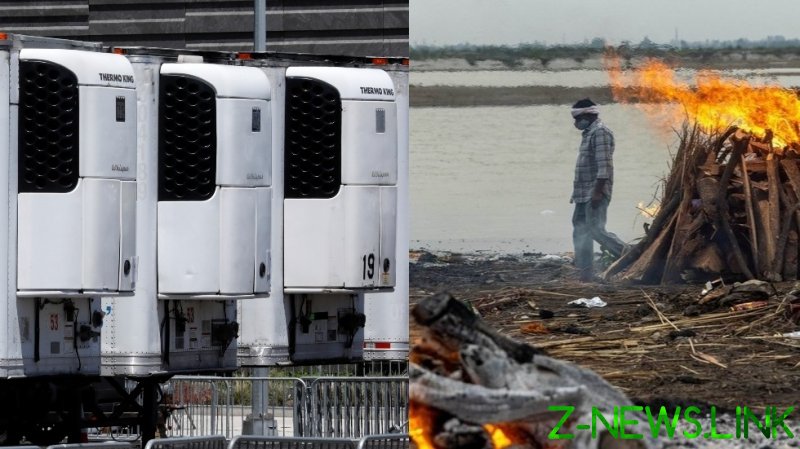 Covid-19 has killed more than 900,000 Americans and over 6.9 million people worldwide, the University of Washington’s Institute for Health Metrics and Evaluation (IHME) claimed on Thursday, citing their own statistical models based on excess mortality.

By contrast, official figures compiled by Johns Hopkins University list 3.24 million deaths globally, of which 580,000 are in the US, as of May 6.

IHME chief Dr. Christopher Murray explained in a series of videos that they used a “variety of statistical methods” to determine excess mortality, which was then weighed against six other factors to calculate whether it would have been due to the coronavirus or other causes.

They compared “anticipated deaths from all causes based on pre-pandemic trends with the actual number of all-cause deaths during the pandemic,” then removed the deaths both “indirectly attributable” to the pandemic and “averted” by the lockdowns.

“When you put all that together, we conclude that the best way, the closest estimate, for the true Covid death is still excess mortality, because some of those things are on the positive side, other factors are on the negative side,” Murray said.

The institute apparently suggests that official Covid data is not to be trusted – and their extrapolated “statistics” imply that some nations are even more untrustworthy than the others. For instance, they claim that Russia had almost six times more coronavirus deaths than its official numbers – almost as many as Brazil, whose official numbers are supposedly off by a third, again by IHME metrics. By contrast, the UK “undercounted” its deaths by only 60,000 or so.

The bombshell claim, while promptly parroted by major media outlets, was met with some skepticism by other scientists. William Hanage of Harvard University told NPR in an email that IHME’s claim that Covid-19 deaths have been “substantially undercounted” in some places more than others “is likely sound, but the absolute numbers are less so for a lot of reasons.”

“Their estimate of excess deaths is enormous and inconsistent with our research and others,” said Dr. Steven Woolf of Virginia Commonwealth University. “There are a lot of assumptions and educated guesses built into their model.” Woolf’s team of researchers published a study on excess mortality in the US in last month’s Journal of the American Medical Association (JAMA).

IHME is so confident of their figures, however, that it said their future modeling will be based on these estimates of total deaths.

The institute, which receives generous funding from the Bill and Melinda Gates Foundation, produced models that were used by the US government last March and April to impose lockdowns – but ended up being far ahead of the actual death toll of the pandemic.

A number of scientists criticized their projections as flawed, unsuitable and unreliable, with one epidemiologist going so far as to label the reliance on them a “travesty” of public policy.