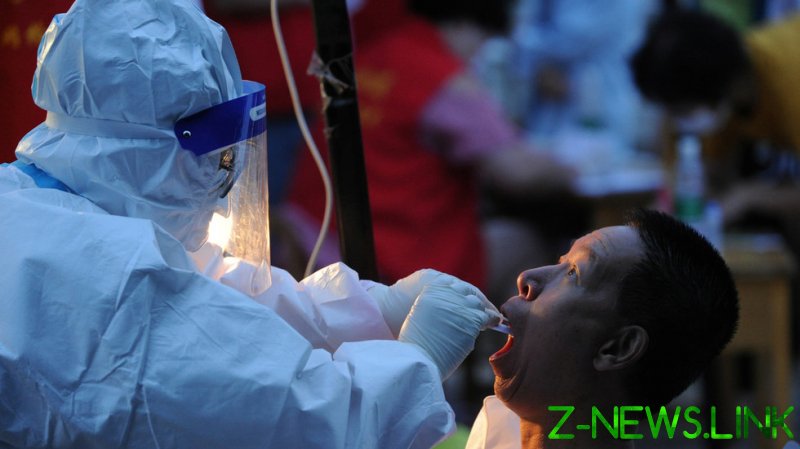 Qingdao authorities have announced a citywide testing campaign that will embrace an estimated 9 million inhabitants and last for 5 days, it emerged on Monday. Images that surfaced online showed local residents waiting in queues to undergo a Covid-19 test. Some of the test counters had already started working on Sunday night

The blanket move appears to be an emergency response to six new and six symptomless cases recently discovered in the coastal city. Most of them were linked to the Qingdao Chest Hospital which treats mild and asymptomatic Covid-19 patients that came from overseas.

Some residential blocks and hospitals where the infected people lived and visited were sealed off. The hospital itself was locked down as part of the containment measures.

The discovery and the testing campaign that followed comes a week after China celebrated the Golden Week holiday which saw millions of people travel across the country. Responding to the news from Qingdao, the nearby city of Jinan has reportedly called for anyone who visited the city since September 23 to get tested for Covid-19.

Dalian, a coastal city in Liaoning Province, has issued a travel alert telling locals to refrain from visiting Qingdao and declare their travel record from September 27.

Meanwhile, the National Health Commission (NHC) reported that mainland China had 21 new confirmed Covid-19 cases. The report did not include the confirmed cases in Qingdao. The number of new asymptomatic cases, which are not counted as confirmed cases in China, surged to 32 on Sunday from 23 a day earlier, the NHC said.

The total number of confirmed Covid-19 cases now stands at over 85,500 in mainland China, while the death toll remains unchanged at 4,634.

ll in all, this is not the first time there’s been a major coronavirus alert in Qingdao. Last month, two port workers who handled a batch of imported seafood tested positive for Covid-19. The products were immediately sealed and blocked from entering the market, and mass testing took place. However, none of the 12,000 of dock workers tested positive.