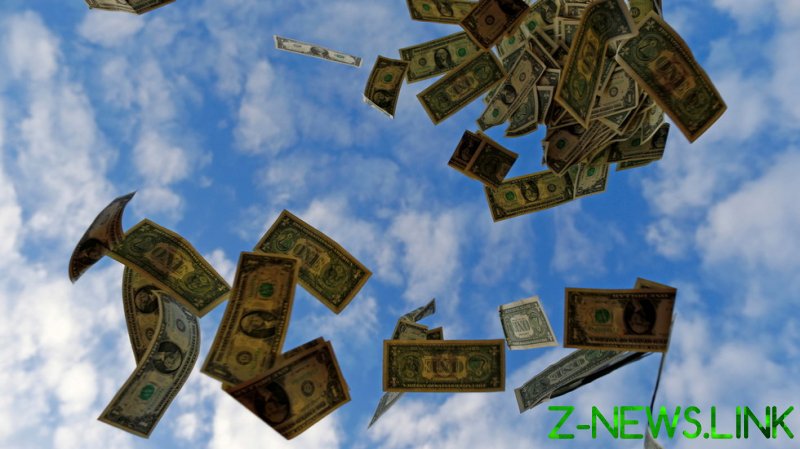 If the German sociologist Max Weber, noted for his seminal 1905 work ‘The Protestant Ethic and the Spirit of Capitalism’, was correct in his assumptions that individual labor serves a moral and spiritual purpose, then the United States has become a veritable den of iniquity. Indeed, the belief that government benevolence will bail out America from any and all scourges – viral, economic or otherwise – carries all the trappings of a dangerous cult.

Amid enormous government stimulus spending to offset the ravages of Covid-19, a whopping 34% of US income now comes not from the sweat of one’s brow, but from that bottomless pit known as Uncle Sam’s pockets. According to the latest Personal Income and Outlays data, which provides statistics on government-subsidized income such as stimulus checks, unemployment benefits, welfare, etc., handouts exploded to an astronomic annualized $8.1 trillion. That is double the $4.1 trillion subsidy figure from February, and has allowed President Joe Biden’s administration to boast about a “record surge in personal income and spending.”

As if that cash cow were not bloated enough, the Biden administration is planning to bypass Congress and establish a long-term increase in food aid for tens of millions of Americans.

“A review of the so-called Thrifty Food Plan, ordered by Biden two days after he took office, could trigger an automatic increase in benefits as soon as Oct. 1, a day after expiration of a temporary 15% boost in food stamp payments that Biden included in his $1.9 trillion Covid-relief package,” Bloomberg reported.

Quoting James Ziliak, director of the Center for Poverty Research at the University of Kentucky, Bloomberg wrote the increase would amount to “roughly a $136-a-month increase in the maximum benefit for a family of four, which was $680 before the temporary pandemic-related increase.”

According to the Center on Budget and Policy Priorities, citing data from the US Census Bureau, “some 18 million adults – 9 percent of all adults in the country – reported that their household sometimes or often didn’t have enough to eat in the last seven days.”

Compare that to the 3.4% of adults who said their household had “not enough to eat” at some point over the full 12 months of 2019. Since it is no secret that millions of Americans are at the breaking point financially amid the pandemic, it is worth wondering what bout of madness caused the Biden administration to open America’s door to illegal migrants from south of the border? But I digress.

At this point, it is also tempting to ask why the US government opted to enact an unprecedented scorched-earth policy with regards to its workforce and economy when confronted by Covid-19. After all, for much of the healthy population under the age of 60, the survival rate from the coronavirus is about 99%. According to research by Hal Jenson, the dean of Western Michigan University Homer Stryker M.D. School of Medicine, the unprecedented steps enacted by the US government to offset Covid-19 “have significantly adversely affected hospitals rather than support them, and the overall impact has been to ‘flatten the economy’ rather than just to ‘flatten the curve.’”

Why were millions of American workers, inexplicably and cruelly branded as “non-essential,” forced into economic despair at the very same time that the “essential” big box corporations like Wal-Mart and Amazon bucked the lockdown trend thereby reaping an epic windfall for their billionaire owners? If anything contradicts the “Protestant work ethic” that would be it. Never before in history has a virus brought the US economy to its knees, so it’s very difficult to explain why Covid-19 had so much success on that score.

By inundating the American people with a non-stop flow of free money, they are being trained in a form of learned helplessness and dependence. During the Great Depression, by comparison, the government also subsidized the economy through the 1933 New Deal under Franklin D. Roosevelt. The difference was that Americans were put to work on massive infrastructure projects, building dams, highways, bridges and hospitals. Under the project, my hometown of Pittsburgh received the largest swimming pool in the US when it opened on July 5, 1937. Such work projects gave millions of Americans a sense of pride as opposed to a sense of desperate dependency, which many must feel today.

Although some government assistance could be considered understandable under the circumstances, the spectacle of the US government writing endless checks to its people seems to be sending the wrong message to a nation founded on thrift, hard work and independence. I pray the country and its work ethic survives this spate of unprecedented generosity.