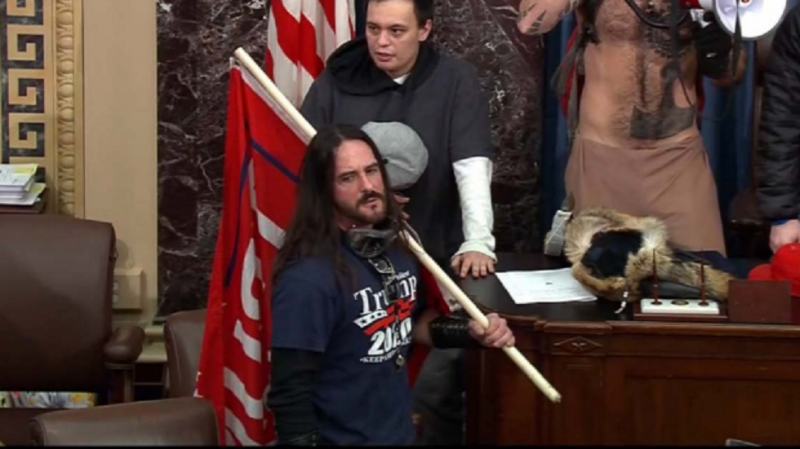 Paul Allard Hodgkins pleaded guilty in June to obstructing Congress, a felony crime with a theoretical maximum sentence of 20 years in prison. Hodgkins, of Tampa, Florida, entered the US Capitol in January alongside crowds of former President Donald Trump’s supporters, carrying a ‘Trump 2020’ flag. He snapped selfies in the Senate chamber and posed alongside infamous ‘QAnon Shaman’ Jacob Chansley.

Hodgkins was sentenced to eight months in prison and 24 months’ probation by a federal judge in Washington, DC on Monday, and his punishment is expected to serve as a benchmark for hundreds of other rioters facing felony charges. One rioter has already been sentenced for misdemeanor offences: 49-year-old Anna Morgan Lloyd, who received three years’ probation last month, in addition to a fine and community service. Lloyd received leniency after disavowing the conduct of her fellow rioters and telling her judge that she had read anti-racist literature supplied by her lawyer.

Democratic Party politicians and the liberal media have characterized the January 6 riot as an “insurrection” and an act of “domestic terrorism.” Prosecutors in Hodgkins’ case have used similar verbiage, with a sentencing request from the government stating that “the need to deter others is especially strong in cases involving domestic terrorism, which the breach of the Capitol certainly was.”

Government prosecutors asked the judge to apply a sentence of around 18 months, claiming that “like each rioter, [he] contributed to the collective threat to democracy.”

“Threat to democracy,” however, is not a legally defined crime, and the actual impact of the riot on American democracy has been the subject of heated debate between the left and right since January. While President Joe Biden has called the riot the “worst attack on our democracy since the Civil War,” the mob was dispersed within several hours and Congress swiftly resumed its job of certifying Biden’s electoral win. Moreover, Hodgkins was not charged with conspiracy, meaning the conduct of the rest of the rioters should have no bearing on his case.

Hodgkins’ defense attorney pushed back against the use of the term “domestic terrorism” by the government. Speaking in court on Monday, he asserted that calling the riot “domestic terrorism” is “offensive and gaslighting the country, and it needs to stop…. It was a protest that became a riot, period, full stop.”