70-year-old woman savagely beaten on LA bus, allegedly because she ‘looked Asian,’ amid rash of hate crimes in California 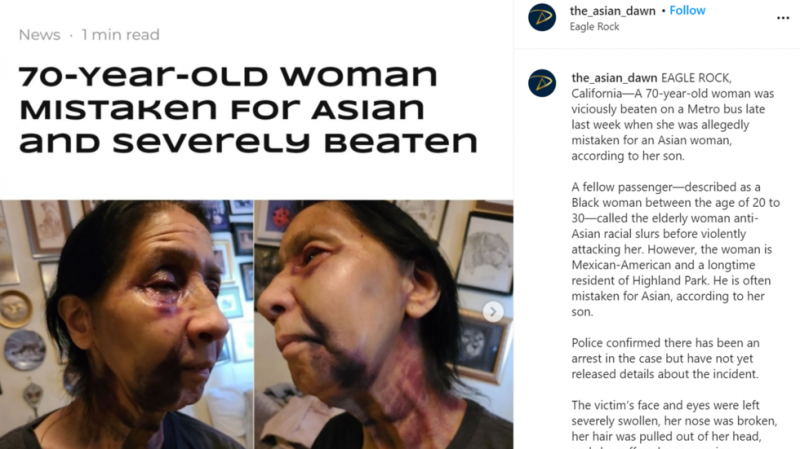 The 70-year-old, identified in the media as ‘Becky’, was exiting a Metro bus on her way to a local supermarket when the attack occurred. According to Becky’s son, the female assailant yelled racial slurs at his mother as she beat her.

The victim suffered a broken nose, a concussion, and her face and eyes were left severely swollen. The attacker even pulled hair out of her head. Becky’s son provided photos to local media showing the horrific injuries. He claimed that no one tried to intervene as the attacker, whom he described as a “black girl,” began hitting his mother on the head. Eventually, a passenger called 911.

According to the Los Angeles Times, a 23-year-old woman was arrested on suspicion of felony battery. A local NBC affiliate, citing prosecutors, said that the suspect will face hate crime charges, and one charge of abuse with injuries to an elderly person.

It’s unclear what motivated the brutal attack, but Becky’s son said that his family members are often mistaken for Asian.

Local transportation authorities issued a statement condemning the assault and stressed that they had a zero-tolerance policy for violence.

“We strongly condemn any offenses done in the name of race, religion, sex or national origin,” the LA Metro said.

The incident comes amid a spate of suspected hate crimes in Los Angeles and other cities across California. Earlier this week, a 39-year-old Hispanic man was attacked in East Hollywood. His assailant, who has not yet been arrested, reportedly yelled racial and homophobic slurs as they carried out the assault.

A day earlier in El Cerrito, in the San Francisco Bay area, a man followed an Asian woman into her garage, shouted racial insults and spat in her face.

It’s unclear what is behind the string of attacks, but some have claimed that anti-Asian violence is on the rise in America due to anger over the coronavirus pandemic, which some have blamed on China.