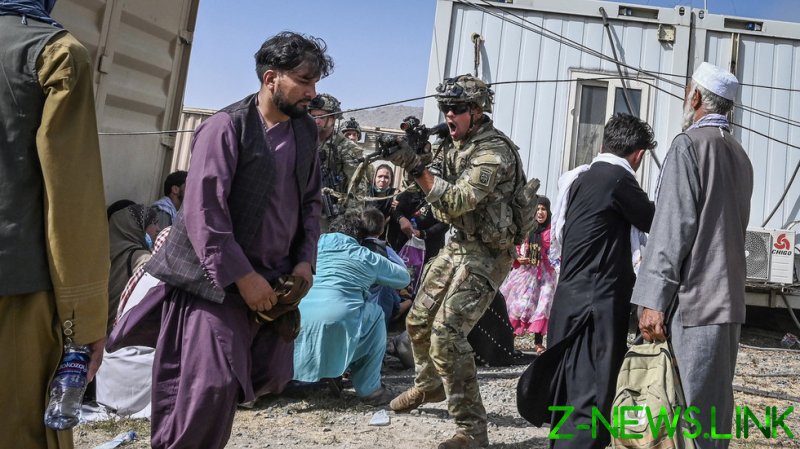 The death toll was reported by the Associated Press on Monday, citing US officials. Throughout Sunday night, US troops brought in to protect the evacuation of American diplomats and workers struggled to keep hundreds of desperate Afghans off the runway at Kabul’s Hamid Karzai Airport, which is now the only lifeline between Taliban-controlled Afghanistan and the outside world.

Two of the people killed by US troops were gunmen, sources told Reuters. Meanwhile, CNN reported that one American troop was injured.

A number of men had clung to a US military transport plane as it took off, but fell to their deaths shortly after takeoff. Their horrifying plunge to the ground below was captured on camera, with the footage shared on social media.

Commercial flights out of Kabul were suspended on Sunday, but droves of people crowded onto the airport’s single runway regardless, in a last-ditch bid to catch a flight out of the capital.

American troops struggled to hold back the crowds overnight, and reports surfaced of volleys of gunfire and of stampedes breaking out.

Taliban fighters are also attempting to keep crowds back from the airport, per multiple reports.

Hordes of people have still managed to scale the fence surrounding the airport, and video footage shows crowds packing the tarmac and climbing atop parked commercial planes.

Military flights are currently leaving the airport, but a US official told CNN on Monday that sporadic suspensions are expected if people continue to swarm the airport’s single runway.

The rush to the airport began on Sunday when Taliban militants entered Kabul and US-backed President Ashraf Ghani left the country. With the capital under Taliban control, American and some other foreign diplomats and workers made for the airport, along with thousands of Afghan civilians looking for a ride to the west.