Home / WORLD / ‘7 billion people in the world & you chose me’: MMA star Schilling KNOCKS OUT man in bar with vicious combo (VIDEO)

‘7 billion people in the world & you chose me’: MMA star Schilling KNOCKS OUT man in bar with vicious combo (VIDEO) 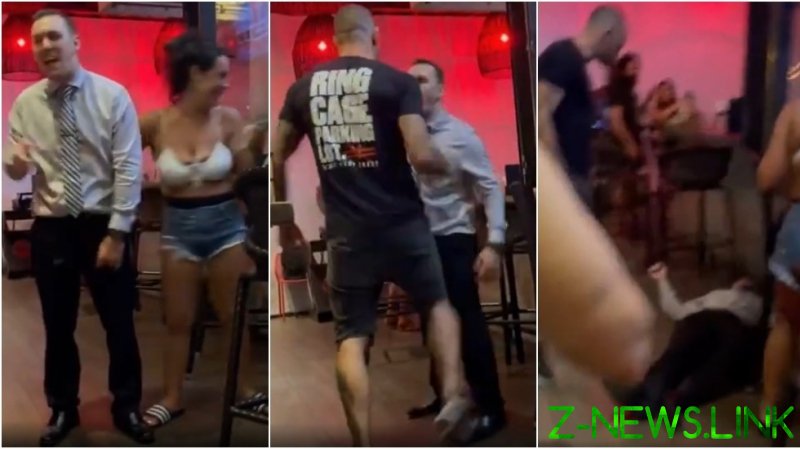 The brief clip, which has since gone viral on social media, shows Schilling, 37, walking past an unidentified man in a busy bar. The pair appear to brush shoulders as Schilling attempts to walk by.

The footage appears to show the man shouting something at Schilling, who immediately turns to confront him. The two briefly exchange words before Schilling unleashes a brutal combination of punches which sends the man falling backwards to the floor with a sickening thud. Schilling then calmly walks out of frame.

A woman who was seen in the footage dancing with the man then quickly rushes to his aid, but it appears that he had been knocked unconscious. It is unclear where the incident took place or if police subsequently became involved.

Schilling, who at one point was one of the world’s top-ranked kickboxers before embarking on a career in mixed martial arts, shared footage of the incident to his Instagram page – before quickly deleting it.

However, he explained his actions as being necessary because he says that he felt his life was in jeopardy and wrote that he acted in “self defense” because he was faced with a “life-threatening experience”.

“Self defense is apparently not what this country is about anymore,” wrote Schilling.

“Don’t trip I got the video love you guys thanks for the concern and support during my life threatening experience.

“Big shout out to @theyardmuaythai for preparing me for this life threatening situation #f***racists.”

After compiling a record of 23 wins against 9 defeats in the kickboxing world, Schilling turned his attention to MMA in recent years and has earned a record of 3-3 in Bellator since making his debut with the fight league in 2014.

He was last seen in the cage in 2019 where he was sensationally knocked out in the third round by unheralded fighter Tony Johnson.

Earlier in his career he was defeated by UFC standout Tony Ferguson in one of his maiden mixed martial arts bouts, losing to ‘El Cucuy’ by second-round submission.