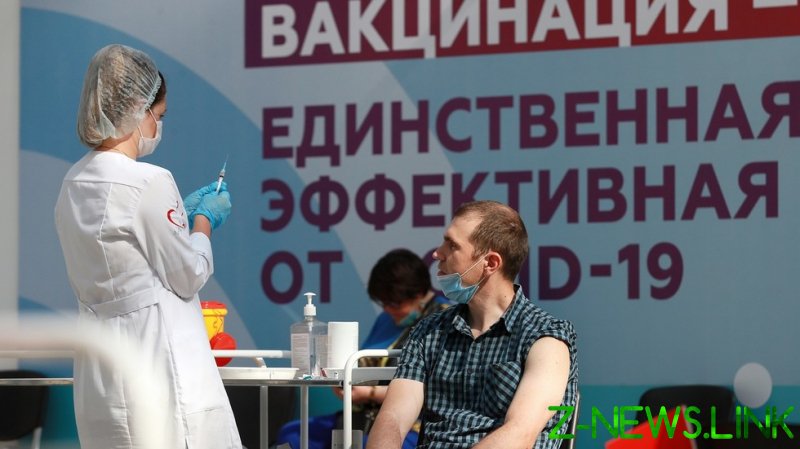 Knowingly named after Sputnik, the first artificial Earth satellite, the Russian-made shot has now been approved in 69 different countries and has shown up to 97.8% efficacy in real-world studies, making it one of the most reliable Covid-19 formulas on the planet. It has also received international praise, with reputable Western scientific journals like The Lancet and Nature determining it to be both safe and effective.

In addition, the fact that doses do not need to be kept in deep-freeze storage has made Sputnik V a popular choice around the world.

Speaking on Sputnik V’s anniversary, Kirill Dmitriev, the head of the Russian Direct Investment Fund (RDIF), praised the vaccine for “saving millions of Russians’ lives.” The RDIF bankrolled the jab’s development and is responsible for its marketing abroad.

“One year ago, the world’s first Sputnik V vaccine was registered. This was, undoubtedly, an important event for the whole world,” Dmitriev said. “Sputnik V has become the backbone of vaccination in Russia.”

However, despite the vaccine appearing to be reliable, the international rollout hasn’t been a complete success, with some countries waiting months for delayed deliveries of doses, and others canceling orders altogether. Sputnik V is also yet to be approved by either the World Health Organization (WHO) or the European Medicines Agency (EMA), despite applying for registration months ago.

Like the Western-made AstraZeneca and Johnson & Johnson jabs, Sputnik V is an adenoviral vector vaccine, meaning it works by injecting a harmless virus designed to deliver a spike in proteins. However, unlike most other Covid-19 shots, Sputnik V is a ‘vaccine cocktail’ made up of two separate vectors, meaning the initial and booster injections are entirely different. According to the creators, this approach “generates a more sustainable immunity compared to vaccines that use the same delivery mechanism for both shots.”

With Sputnik V now in use around the world, many countries have produced their own research into the efficacy of Moscow’s jab. In Russia itself, analysis of 3.8 million vaccinated individuals revealed that the shot has 97.6% efficacy, with no serious adverse events or vaccination-related deaths. Russia’s Ministry of Health also announced that it is 94.4% effective at preventing hospitalization.

Other countries have posted similar numbers, with the UAE Ministry of Health finding Sputnik V to have an efficacy of 97.8%, with efficacy against severe cases of Covid-19 at 100%.

In Hungary, the first EU country to approve Sputnik V, official government research, albeit based on a relatively small sample, showed that the Russian jab had the best safety and efficacy record of all five vaccines registered by the authorities.

The shot also appears to be effective against all strains of Covid-19, including the Delta variant.

According to Alexander Gintsburg, the head of the Gamaleya Center, where Sputnik V was developed, over 40 million doses have been produced and released. Most of the jabs have stayed within Russia.

However, despite at least four separate facilities producing the shots, the distribution of Sputnik V has been marred by missed deliveries caused by the country’s limited pharmaceutical production capacity, itself a legacy of Soviet-era manufacturing conventions. This has caused the country’s program of vaccine diplomacy to stutter, with the producers failing to meet the terms of contracts with other nations.

For example, in Argentina several million people have been waiting months for their second Sputnik V dose. In July, Russia’s failure to deliver the vaccine on time caused Cecilia Nicolini, an adviser to the Argentinian president, to write to the Russian Direct Investment Fund (RDIF), threatening to cancel the contract altogether. Because of the delay in delivery of doses, the gap between the first and second shots had to be increased to three months rather than three weeks.

The vaccine rollout hasn’t gone particularly well at home, either, with many Russians still refusing to be inoculated. While take-up has increased in recent months, encouragement from government officials seems to have gone ignored, to varying degrees. Vaccine skepticism in Russia is still a big problem, and many citizens believe they lack an incentive to be jabbed while the country operates as normal, with very few restrictions affecting daily life.

The future of Sputnik V may be somewhat brighter, however. In November last year, the vaccine’s creators offered to mix the first dose of the Russian shot with the jab developed by Oxford University and AstraZeneca in the UK. Since February 2021, joint trials have been ongoing in the United Arab Emirates and Azerbaijan. The same trial is also being conducted in Argentina, where the Russian jab is also being tested in conjunction with the Chinese Sinopharm and the American Moderna vaccines. Once complete, these trials should show a pathway for Sputnik V as part of a cocktail with other jabs from around the world.