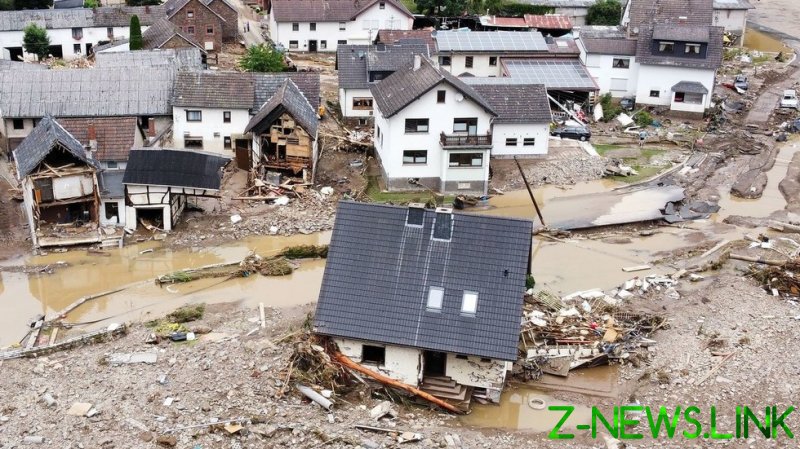 Days of extreme weather resulted in major flooding in western Germany this week, with the death toll climbing to 59 on Thursday – 31 of which occurred in the state of North Rhine-Westphalia, while another 29 victims were found in Rhineland-Palatinate, according to local media reports.

The widespread devastation was captured in photos and videos circulating online, including footage from RT’s video agency, Ruptly.

An estimated 1,300 people remain missing, as more than 1,000 police officers, firefighters, soldiers and other disaster relief workers sift through rubble in Rhineland-Palatinate and North Rhine-Westphalia – the two worst-hit states – as well as the neighboring Baden-Wurttemberg. Ten helicopters were deployed during the rescue efforts, with three more outfitted with cable winches prepared to continue the search through the night.

Authorities are also still working to restore gas, electricity and water in the affected areas, while Germany’s Federal Agency for Technical Relief (THW) is preparing to build temporary water treatment sites in some locations.

After heavy downpours, the Steinbachtalsperre dam near the town of Euskirchen in North Rhine-Westphalia is at risk of giving way. Local authorities warned in a Facebook post that a “sudden failure… must be expected at any time,” despite efforts to keep the structure standing. At least six houses have also collapsed, with 25 more in danger of falling.

German Chancellor Angela Merkel, who is visiting the US for a meeting with President Joe BIden, said the floods were “catastrophic,” adding that help is on the way for those affected.

“My thoughts are with you, and you can trust that all forces of our government – federal, regional and community – collectively will do everything under the most difficult conditions to save lives, alleviate dangers and to relieve distress,” she said.

Biden also offered condolences for victims, saying “It is a tragedy and our hearts are with the families who have lost loved ones.”

Around 3,500 people are now being housed in temporary care facilities around the country as the rescue and relief operations continue.

Germany was not the only nation slammed by inclement weather. Floods have also hit Belgium, Luxembourg and the Netherlands. Nine were reported killed in Belgium, according to the Belga news agency, while Dutch authorities have urged thousands of residents to flee flood-prone areas.

The casualties in Germany are nearly three times those inflicted by major floods in 2002, which hit countries across Europe and caused billions in damage.