50,000+ illegal migrants were released into US in 4 months and only 13% checked back in – reports 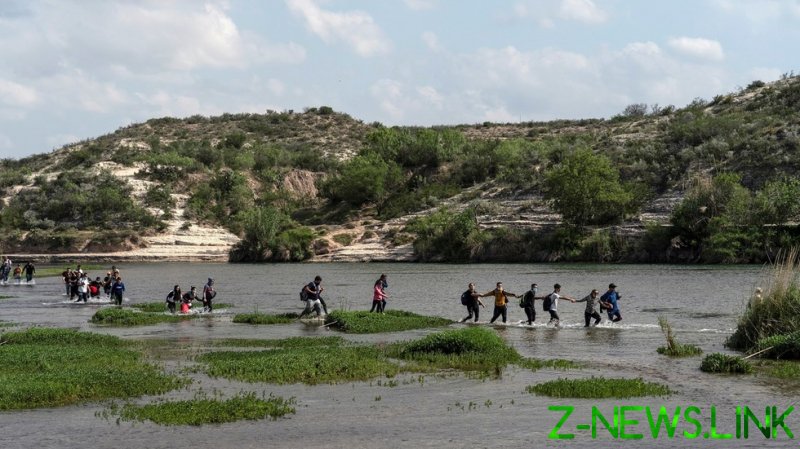 People who cross the border illegally are normally held in ICE detention, or transferred to other US government agencies. Some are released on bond and given a date to appear before an immigration judge.

Since mid-March, however, more than 50,000 migrants have been released by ICE into the interior of the US, with only a sheet of contact information for ICE offices where they should check in “to get work permits,” according to Axios.

Only 6,700 of them, or about 13%, have actually checked in with ICE as of Monday, the outlet reported citing a source briefed on Homeland Security data. Some 27,000 still have time to show up, while the rest went missing and haven’t checked in within the prescribed 60 days.

Axios also cited Congressman Henry Cuellar (D-Texas), who said that 7,300 migrants in just the Rio Grande Valley sector had been released during the past week, and that the total number was closer to 55,000.

Cuellar, whose district stretches along the Rio Grande, was responsible for publication of photos showing the holding facilities for unaccompanied minors, back in March.

The surge of illegal migrants into the US continues, with more than 20,000 people apprehended in the Rio Grande Valley sector alone just last week.

Earlier this month, the US Border Patrol said apprehensions along the border had reached a 20-year record, exceeding one million people in this fiscal year – with three more months left to go. More than 178,000 people were detained in June – including 56,000 traveling as families, a 25% increase from May.

On Tuesday, the White House announced it was seeking “expedited removal” of families and children crossing illegally. However, only 14% of such migrants were expelled in June, according to CBS News. The Biden administration said the process was being hindered by Mexico’s refusal to accept families not from Central America, CDC rules and humanitarian exceptions, among other things.

Others pointed out that the administration was allowing this to happen while reinstating some coronavirus restrictions on Americans.

“The same people [who] want to mask you and lock you down for your ‘safety’ are facilitating an invasion of our country by tens of thousands of unknown foreign nationals,” said Newsmax host Benny Johnson, calling it “evil” and “repulsive disrespect for America from our ruling class.”

Covid-19 vaccination is so important “that we are allowing an unlimited number of unvaccinated people to enter the country illegally and releasing them, even chauffeuring them, into the interior,” tweeted Pedro Gonzalez of Chronicles magazine.

One of the first things President Joe Biden did upon taking office in January was to revoke most of his predecessor Donald Trump’s immigration policies, starting with halting construction on the border wall. Despite the record-shattering influx of migrants, some wearing “Biden let us in” shirts, the White House has refused to call the situation on the border a “crisis” and insisted the surge was seasonal and caused by climate change, violence, or poverty.

Vice President Kamala Harris was put in charge of the border situation, and has since visited Mexico, Guatemala, and a Border Patrol office in El Paso, on the other side of Texas from the Rio Grande Sector.

On Tuesday, the White House released a document dubbed the ‘Blueprint for a Fair, Orderly and Humane Immigration System,’ in which it said the US “will always be a nation of borders, and we will enforce our immigration laws in a way that is fair and just.”

“We will continue to work to fortify an orderly immigration system,” the document added.