Home / WORLD / 50 years on, ‘A Clockwork Orange’ is more relevant than ever… It perfectly captures 2021’s dystopian depravity

50 years on, ‘A Clockwork Orange’ is more relevant than ever… It perfectly captures 2021’s dystopian depravity 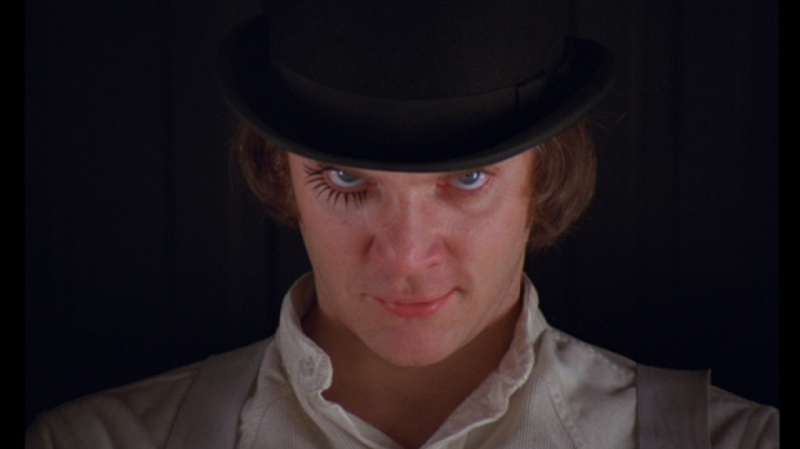 Fifty years ago, the Beethoven-loving Alex DeLarge (Malcolm McDowell) donned his droog uniform of all white, false eyelashes (on one eye), a bowler hat and prominent codpiece, and sang and danced into our twisted hearts with his brutally ironic – and ironically brutal – rendition of ‘Singin’ in the Rain’.

Yes, it’s been a whole five decades since ‘A Clockwork Orange’, director Stanley Kubrick’s controversial masterpiece, was unleashed upon the public, and to mark the anniversary it’s being heavily promoted again. Apparently, time flies when you’re busy doing all that old in-out in-out and ultra-violence.

I recently bellied up to the Korova Milk Bar, put my feet up on a distractingly attractive nude mannequin, downed some Moloko Plus (with drencrom) and re-watched the film, and discovered that Kael is still egregiously wrong and that Kubrick’s vision has only gained in strength over the years.

Seeing the movie through the eyes of 2021 is an alarming exercise – not because the film is pornography, but because the world of ‘A Clockwork Orange’ bears an uncomfortable resemblance to our own.

The film is set in a dystopia that is decaying yet decadent, where every relationship and interaction is clouded by a will to power and will to pleasure that dehumanizes everything it touches. Alex’s universe is authoritarian and cruel on both an individual and institutional level, where everything and everyone is deeply marinated in a corrosive moral and ethical corruption. Sound familiar?

Turn on a television, read a newspaper, or wade into the fetid swamp that is social media and you’ll experience the same ghastly, grotesque world Alex inhabited, with only minor details being different.

Like violent cops, flag-waving militarists, MAGA members, Black Lives Matter, identity politics adherents, CRT proponents, or cancel culture Twitter mobs, for Alex and his droogs, cruelty isn’t a bug – it’s a feature, as it gets their blood pumping and gives their meaningless lives a momentary purpose.

Another striking similarity between the film’s world and our own is that everything is performative.

Whether it be the droogs’ fight against Billy Boy and his Nazi-adorned gang – which is reminiscent of an Antifa v Proud Boys battle, where the anti-fascists are just as fascist as the fascists they fight – occurring under a proscenium arch; or his infamous song and dance as he assaults the Alexander couple; or his on-stage humiliation under the spell of the Ludovico technique; or his smiling, steak-eating photo-op with the minster of the interior, Alex is always performing.

And so it is with our time, where social media has morphed both the mundane and the monstrous, and the personal and the political, into performance art.

The most intriguing revelation of my re-watch was the realization that Alex’s odyssey down the bloody brick road of ‘A Clockwork Orange’ is a journey to the most exalted position of power in any decaying and inverted civilization: that of victim.

Alex is a sort of anti-Christ, not in the sense that he is Satan, but rather that his suffering ultimately does not bring about any personal or spiritual catharsis, instead solidifying in him the fallen nature of man.

Like the apes in Kubrick’s ‘2001: A Space Odyssey’who evolve to use bones as weapons, victimhood just becomes another tool for Alex to reap violence. When he is labelled a “victim of the modern age,” the wily Alex quickly recognizes that moniker as a powerful new weapon and thoroughly embraces it.

This evolution doesn’t turn Alex from a barbaric beast into a beatified being, but instead makes him an even more monstrous predator able to swim with a higher class of sharks – namely the minister of the interior, who fills his gob with filet in front of a mindless press, who eat up the story like Alex does his well-served meal.

In our current age where victimhood reigns supreme, there are hordes of eager new Alexes yearning for this ultimate superweapon, and none of them even care a lick about Ludwig Van. These self-declared victims know to exploit their stories to gain power, while others emulate that manipulation and conjure victimhood where none exists in order to elevate their social status and bludgeon their enemies. Of course, the establishment media drink up this insidious victimhood narrative like it’s Moloko Plus with vellocet.

Re-watching ‘A Clockwork Orange’made it abundantly clear that a movie like this, as great as it is, could never be made in a cultural climate like ours.

The film is too bold, too brash, too brazen in its honest-yet-stylized depiction of the foibles and failures of humanity and our society, and too unflinching in its artistic honesty and insight.

In addition, Kubrick, despite the fact he is one of the greatest filmmakers of all-time, would be deemed too ‘problematic’ and his politics too amorphous to pass the cancel culture test of 2021.

The film also features a prodigious amount of nudity and violence, which in our oddly and performatively puritanical times, would make it a no-go for the corporate entities of Hollywood. That’s deeply ironic, since our country and culture is so steeped in actual pornography and real-life violence.

Thankfully ‘A Clockwork Orange’ did get made, and what was a great film in 1971 is even greater when seen in the context of 2021. Do yourself a favor and go watch it, and see that Kubrick wasn’t just a cinematic genius – he was a prophet.