47 detained after rally against vaccine mandates clashes with police in Athens, Greece (VIDEO) 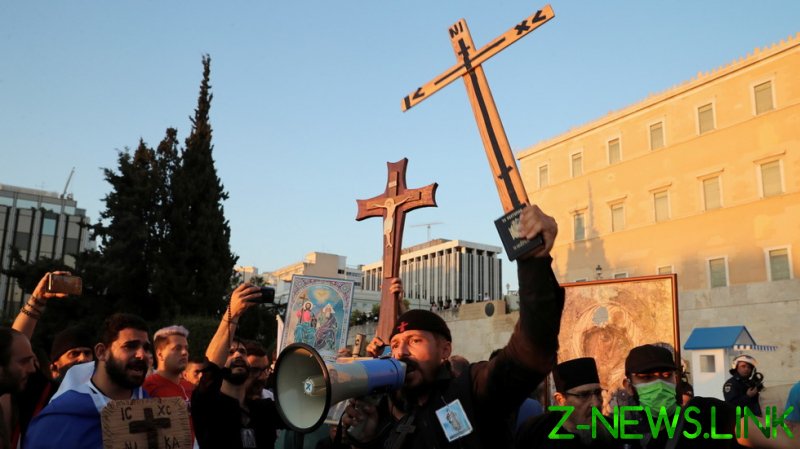 Tensions were running high outside the Greek parliament on Sunday as some 7,500 protesters flooded the central Syntagma Square, waving Greek flags, chanting slogans and demanding the plan to make vaccinations mandatory for all health professionals starting September 1 be reversed.

Footage shared on social media showed protesters burning flares and throwing bottles at the officers, who responded with tear gas and water cannons.

Eyewitnesses claimed that police also used stun grenades in an effort to disperse the gathering.

Some of the protesters brought Orthodox Christian paraphernalia, such as crosses and icons, to the rally. Images shared online show a protester kneeling  in front of a truck-mounted water cannon, using an icon of Jesus and Mary as a shield.

In another photo three officers in full riot gear could be seen descending on the protester.

According to AFP, the demonstrators carried placards reading: “We are not against vaccines, but against fascism.” An ambulance driver told the agency that he was flabbergasted by the decision of his hospital to put him on sick leave because he declined a Covid-19 vaccine shot, noting that as a frontline worker he has fought “for months” against the virus.

“It’s amazing that I’m put on sick leave because I refuse to be vaccinated when for months I have helped to contain the epidemic, I have worked in very difficult conditions,”  he said.

A total of 47 people have been detained in the wake of the protest, police said in a statement on Sunday evening, reported by the Greek media. Police claimed the demonstrators “threw Molotov cocktails, flares, bottles and other objects at the police forces at the scene,” prompting the officers to deter the protesters with water cannons and the “limited use of tear gas.”

The Greek have been taking to the streets to protest Covid-19 restrictions and vaccination mandates for weeks in a row. Sunday’s rally took place ahead of the September 1 deadline, after which vaccinations will become obligatory for all health professionals both in private and public sectors. Those who refuse to be vaccinated and fail to produce a certificate that they have recently recovered from Covid-19 can be suspended indefinitely. Until now the policy has been in effect only for care home workers, who have been obliged to get a Covid-19 shot since August 16. The restrictions have sparked massive backlash from unionized health workers.

The largest industry union, Panhellenic Federation of Employees in Public Hospitals (POEDIN) said earlier this month says that it was against mandatory vaccinations, but not against the vaccination per se, urging the government to set up special committees to “talk face to face with employees and convince them to vaccinate.”