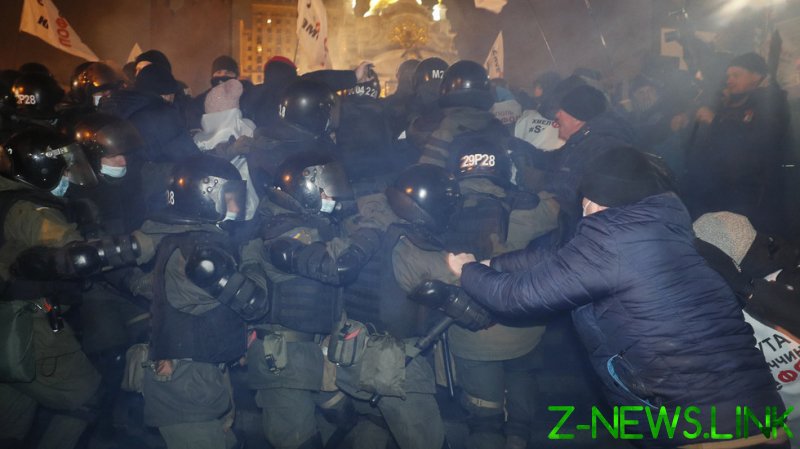 The action, named ‘Stop lockdown!’ by its organizers, started outside the country’s parliament building and drew thousands of attendees. That crowd briefly chanted slogans outside the office of President Volodymyr Zelensky, before moving to Kiev’s traditional protest spot, the Maidan, or Independence Square.

According to local media, clashes began at the Maidan after police tried to prevent the demonstrators from erecting tents on the square.

Footage from RT’s Ruptly video agency showed officers and protesters shoving each other as tensions escalated. Police clad in full riot gear used tear gas against the crowd, who responded by tossing foreign objects and what looked like handmade smoke bombs at the law enforcers.

The police department later said that one of its servicemen was knocked unconscious by a blow to the head, while 40 of his colleagues sustained chemical eye burns from gas during the unrest. There were also wounded among the demonstrators, with ambulances filmed taking people away for medical care.

Covid-19 cases have recently been on the rise in Ukraine, with the country already seeing more than 925,000 cases of the disease and almost 15,800 deaths.

In order to stem the spread of the virus, the government has announced a strict lockdown between January 8 and 24. Cafes, restaurants, fitness clubs, and non-essential shops have been ordered to close, though many owners insist the decision will put them out of business.