Home / WORLD / 40 days to save the planet? Boris’ green act is yet another unprincipled U-turn from a serial flip flopper

40 days to save the planet? Boris’ green act is yet another unprincipled U-turn from a serial flip flopper 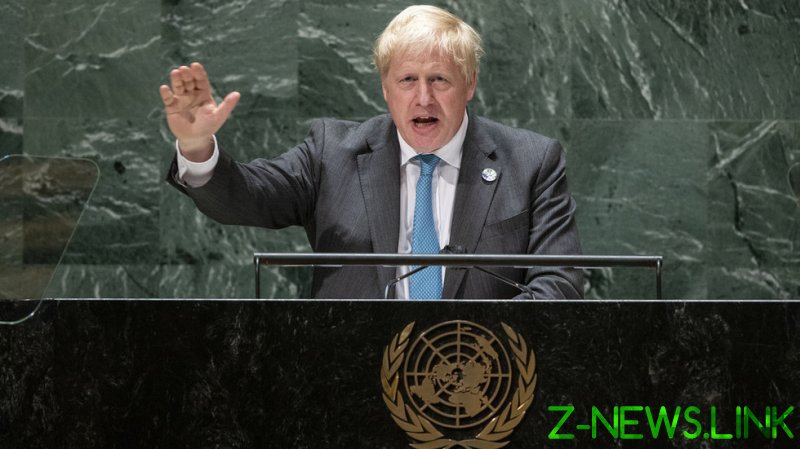 According to BoJo, we have been acting like a 16-year-old and “it’s time for humanity to grow up.” Interestingly, Greta was only 16 when she told the UN that “you have stolen my dreams and my childhood with your empty words,” and yet for some reason, everyone listened to her.

Boris also said that the world has just 40 days “to come to Glasgow to make the commitments necessary” to save the planet. And if we don’t, “our grandchildren will know that we are the culprits … and that we missed our cue, and they will ask what kind of people we were to be so selfish and so short-sighted.”

If he carries on making alarmist statements like this, he’ll end up gluing himself to the M25 or peppering the City of London with red paint.

But the question I have today is, does Boris Johnson actually believe any of his own hot air regarding climate change, or is he just playing politics? Here’s a few examples of what he has said in the past.

In 2006, he wrote that wind turbines “crucify our landscape with wind farms which, even when they are in motion, would barely pull the skin off a rice pudding.” Yet earlier this year the PM committed to spending £95 million to build more wind turbines off the east coast of England, and claimed that every home could be powered using them by 2030.

Now, considering that the lack of wind is contributing to the current energy crisis in the UK, I have to say: I wish we had the Boris of 2006, rather than the Boris of 2021.

In January 2013, during a particularly cold winter, Johnson claimed that the sun was having a far greater effect on the climate than man, and that the weather patterns suggested the beginning of a “mini ice age.”

He wrote, “By my calculations, this is now the fifth year in a row that we have had an unusual amount of snow; and by unusual I mean snow of a kind that I don’t remember from my childhood: snow that comes one day, and then sticks around for a couple of days, followed by more.”

In 2015, Johnson claimed that “global leaders were driven by a primitive fear that the present ambient warm weather is somehow caused by humanity; and that fear – as far as I understand the science – is equally without foundation.”

Granted, the PM now claims that he has changed his mind regarding climate change – or global warming, as it used to be known – because he studied the science when he was London mayor and “the facts change, and people change their minds.”

But Boris has done quite a lot of “changing his mind” on a number of issues over the years. For example, in 2008, when he had just become mayor of London, he called for an amnesty for illegal immigrants. He said they had the right to “earn” their legal status, and has repeated this argument on many occasions during the last decade.

Yet just a cursory look at his voting record shows that he has voted on numerous occasions to prevent illegal immigrants entering employment, renting a home, or indeed, “earning” their right to stay. He is saying one thing for public consumption, but voting in completely the opposite way in Parliament.

And us long-term Brexiteers know just how interchangeable Boris can be. We remember how he dithered before coming out and supporting the Brexit campaign. Indeed, he famously wrote two articles for his Daily Telegraph newspaper column, one arguing for the UK to remain in the EU, and another advocating Brexit.

It was only the evening before that he decided to file the Brexit copy. And why did he do that? Well, many think it had nothing to do with principle, but rather to position himself as the next Tory party leader following the referendum.

The overarching question here has to be: does Boris actually believe in anything? Does he really believe that catastrophic climate change is imminent, or is he just following what the latest Tory in-house focus group is reporting? Indeed, is it all about votes, or is it some sort of newfound principle?

We all know that his wife, Carrie, is a green activist, and so is his father. So maybe it is just a case of poor Boris being browbeaten around the Sunday dinner table.

Either way, to the outside world, BoJo has undergone one hell of a climate epiphany over the past few years. However, whether he actually believes in it is another matter entirely.