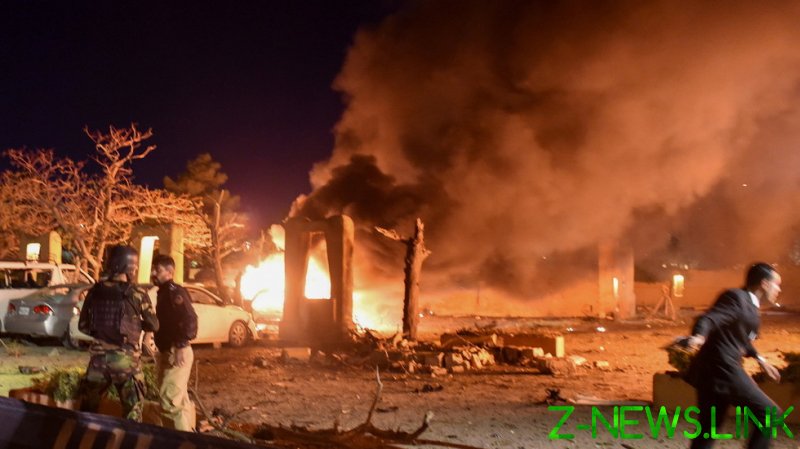 The explosion swept through the hotel parking lot on Wednesday. According to a preliminary investigation, the blast was caused by a bomb that was planted on a car left outside the four-star deluxe hotel.

Footage from the scene showed flames ravaging the scorched remains of several vehicles as sirens blared.

At least four people, including a police official, were killed by the explosion, while 12 others were injured, including several who were taken to hospital in critical condition. Local authorites branded the exposion an act of terrorism, noting that “enemies of Pakistan” were behind the blast.

At the time of the explosion a Chinese government delegation was staying at the hotel. China’s Ambassador to Pakistan Nong Rong was also among its guests, but was away on a function as the blast struck, Pakistan’s Interior Minister Mir Ziaullah Langove said. Addressing speculation that the high-ranking Chinese diplomat might have been the ultimate target of the attack, Langove noted that the investigation would look to answer that question. The minister said he met with Nong right after the blast, and that the diplomat was “in high spirits.”

While the Pakistani government fell short of pointing the finger at the culprit behind the blast, the Pakistani branch of the Taliban – Tehreek-e-Taliban Pakistan (TTP) – claimed responsibility for the bombing, Reuters reported. TTP alleged that the explosion was a suicide attack, triggered by a suicide bomber inside the vehicle.

In recent years, Balochistan, which borders Iran and Afghanistan, has seen a surge in attacks against Chinese interests in the resource-rich province. Five people were killed in an attack on a five-star hotel in Gwadar, a port city on the southwestern coast of Balochistan, in May 2019. The attack on the city, one of the major hubs involved in the China-Pakistan Economic Corridor (CPEC) project, was claimed by militants with the Balochistan Liberation Army. Separatists oppose the CPEC, part of Beijing’s Belt and Road Initiative, which aims to upgrade Pakistan’s infrastructure and connect it to China through roads and sea-links.