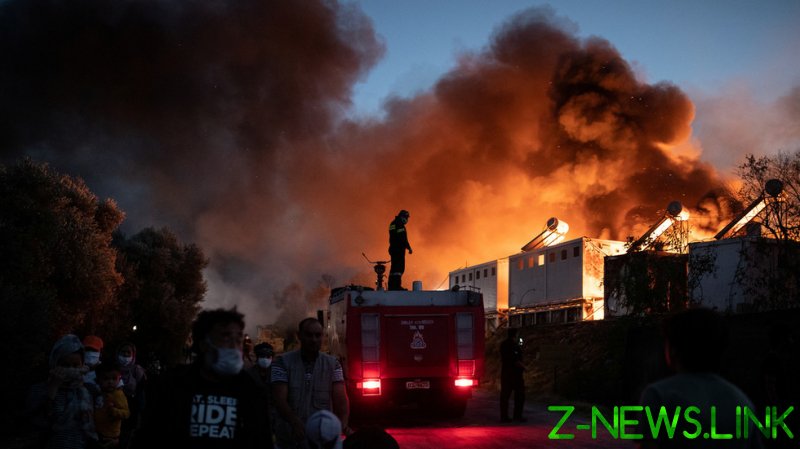 The men were found guilty of arson with risk to human life, the court said in the verdict on Saturday. The defense claimed that their clients had been framed by a witness, saying that the ruling was “an inconceivable conviction without evidence.”

The lawyers earlier filed a request for three of the defendants to be tried by a juvenile court as they were under 18 at the time of fire, but it was turned down by the judge. They already appealed against the sentencing, but it has no suspensive effect and the convicts will be sent to prison right away.

Moria camp popped up on Lesbos amid the 2015 migrant crisis in Europe as numerous refugees were arriving to Greek islands on makeshift boats. It eventually became the largest in Europe, housing more than 12,000 people from Syria, Afghanistan, Iraq and other countries in overclouded tents.

The blaze at the camp broke out in September last year, shortly after the discovery of dozens of coronavirus cases among the inhabitants forced authorities to impose unpopular quarantine measures. There were no fatalities, but Moria was completely destroyed, leaving thousands of people to sleep in the open for days, until a temporary camp for them was erected.

Greek investigators believe that the fire was deliberately started by the asylum-seekers themselves in protest against the Covid-19 restrictions. Six Afghan nationals were detained by the police following the incident, with two of them previously sentenced to five years behind bars back in March.