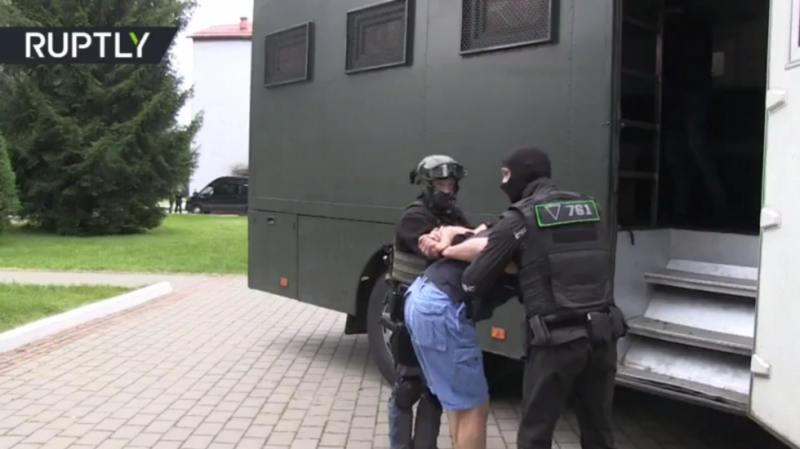 According to a new report published on Wednesday by Western-funded investigative outlet Bellingcat and its Russian partner The Insider, the Ukrainian intelligence services had an elaborate plan to detain the group, but it all fell apart when Belarus started to worry that the men had plans to overthrow the government in Minsk.

The story first hit the news on July 29, 2020, when Belarus announced that it had found 33 Russian mercenaries at a sanatorium. The men were accused of being part of a Wagner private military company (PMC) operation to destabilise the country in the run-up to its presidential election, which took place a month later. Wagner PMC is a mercenary group reported to have served in the Central African Republic, Syria and Libya. Belarusian state media then published footage of the arrests before releasing the complete passport details of everyone detained.

However, according to Bellingcat and The Insider, the arrests were actually the result of a dramatic failed operation by Ukraine’s military intelligence service GUR MOU.

The newly published details allege that Kiev had identified certain mercenaries it believes once fought for separatists in the Donbass, a part of Ukraine where war still rages today.

Allegedly, the 33 men were contracted by Ukrainian intelligence pretending to be a now-defunct PMC, apparently looking to recruit men for an operation in Venezuela. The flight to Venezuela would fly via Istanbul and be forced to cross Ukrainian airspace. While over the country, a fake bomb threat would be phoned in, forcing them to land at Kiev airport. Once on the ground, the mercenaries would then be arrested when the plane touched down.

According to the report, the plan fell apart when Ukrainian President Volodymyr Zelensky requested it be postponed due to a newly brokered ceasefire agreement in the Donbass, where Kiev is currently battling separatists. Zelensky had feared that the truce would fail if the operation were to go ahead.

The delay turned out to be the nail in the coffin of the sting, the investigators claim. The presence of almost three dozen Russian mercenaries raised fears in Belarus, where, with a new election so close, the authorities feared plots to remove President Alexander Lukashenko. The men were arrested on July 29.

After the arrests, Kiev asked Minsk to deport the men to Ukraine. This suggestion was refused while both Belarus and Russia apparently attempted to work out what exactly had happened. Almost three weeks later, after numerous phone calls between Russian President Vladimir Putin and his Belarusian counterpart, the men were eventually repatriated.

Suggestions that the arrests were part of a plot conducted by Ukraine emerged earlier this year when CNN broke the news that the men “were the target of an elaborate intelligence sting by Ukraine, with the knowledge and alleged support of the United States.” The latest report from Bellingcat and The Insider does not mention any Western backing, potentially corroborating a denial from a “senior US official,” also published by CNN.

However, last month, a statement from Russia’s Federal Security Service (FSB) suggested that Moscow still believes Washington played a part in the plot.

“We fully confirm the information published by the television channel CNN. It is absolutely reliable,” the agency said.