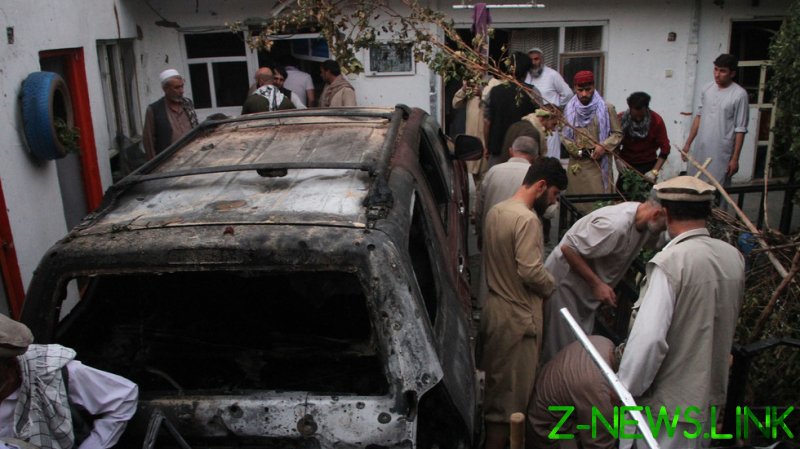 Three children were killed in the Sunday evening strike, the official told AP, and while overall casualty figures are still unclear, unconfirmed reports suggest that as many as nine people, most of whom were apparently from the same family, perished in total.

The strike obliterated a vehicle and sent smoke rising from a residential area of Kabul, a short drive from the city’s airport. Initial reports suggested that the strike took place shortly after a rocket attack on a residential building, but these incidents turned out to be the same.

US Central Command spokesman Capt. Bill Urban confirmed the attack, saying in a statement that “multiple suicide bombers” had been targeted and killed, and their explosives-laden vehicle destroyed. Urban said that the US launched the attack in “self-defense,” as the bombers posed an “imminent” threat to the airport, the focal point of the US evacuation mission.

However, Urban said at the time that the US had “no indications” of any civilian casualties.

The airstrike comes just two days before US forces are set to depart Afghanistan for good, after a two-week evacuation mission that saw more than 117,000 people airlifted out of Kabul, the majority of them Afghan refugees and Special Immigrant Visa holders.

The evacuation has not been a smooth operation, and tensions in the city have run high since a suicide bomber killed more than 150 people outside the airport on Thursday, including 13 American troops. In the chaos that followed the blast, eyewitnesses accused the Americans of firing into the crowd of Afghan civilians, contributing to the appalling death toll.

Islamic State Khorasan (ISIS-K), a regional offshoot of Islamic State (IS, formerly ISIS), claimed responsibility for Thursday’s bombing, and the bombers killed on Sunday reportedly belonged to the group too. ISIS-K is an adversary of both the American troops in Afghanistan and of the Taliban, the latter of which claimed to have arrested several ISIS-K members after Thursday’s attack.