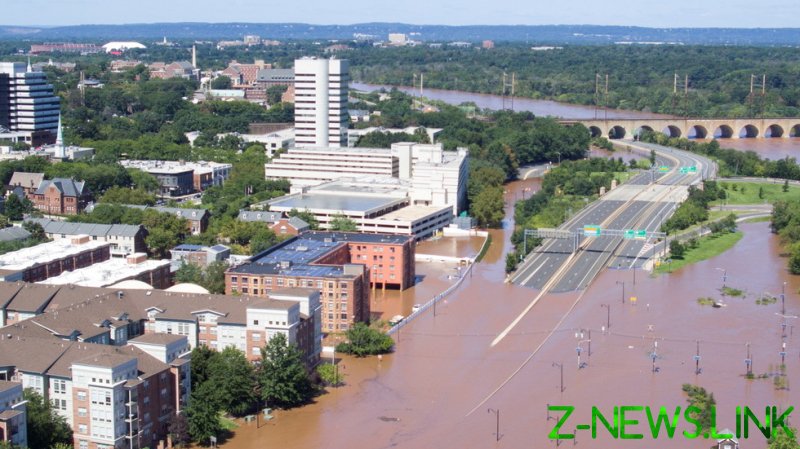 The storm-related death toll reached at least 42 on Thursday, with 23 reported in New Jersey, 13 in New York, four in Pennsylvania and one in both Connecticut and Maryland – the latter victim just 19 years old. A 2-year-old boy was found dead in New York City, one among at least eight victims who drowned in the basements of residential homes, according to New York police commissioner Dermot Shea.

In Woodbury, Connecticut, state trooper Brian Mohl was killed after his vehicle was swept off the road by floodwaters. While working an overnight shift, the officer alerted his department that he was caught in deep water and was in distress – “That is last they heard from him,” said a police spokesman.

Vehicle-related deaths are among the most common after major flash floods. In the Philadelphia area, a 65-year-old man was found dead in his car after it went into a creek during the flooding. Another woman in a Philly suburb was reportedly killed after a tree came down on her home.

Evidence of the destruction wrought by the storms was captured in photos and videos circulating on social media, with one clip showing the roof of one Manville, New Jersey home going up in flames as it remained submerged under several feet of water.

From New York’s subway system to New Jersey’s Newark Airport, and even the state’s TD Bank Ballpark – none were spared by the flooding.

A series of tornadoes also touched down on Wednesday night – seven in New Jersey and Pennsylvania alone, according to the National Weather Service (NWS) – wreaking destruction through several communities.

The storms slamming the East Coast come days after Ida made landfall as a category 4 hurricane last weekend, devastating parts of Louisiana and Mississippi, both of which are still reeling from the storm. While downgraded to a tropical depression earlier this week, Ida’s fallout has brought six to eight inches of rainfall to the northeast, triggering flash floods while setting an hourly rainfall record for Manhattan, according to the NWS.

As of Thursday night, the agency forecasted flooding for 43 locations across the Mid-Atlantic region as the freak weather is expected to continue.