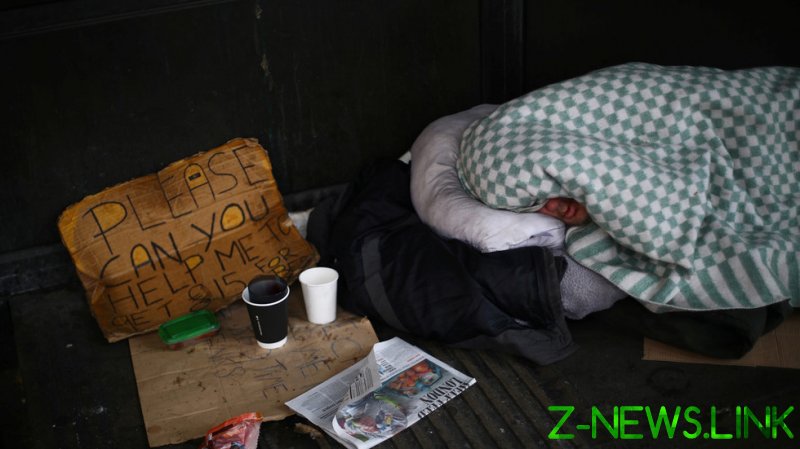 More than a million households totalling 2.4 million people were destitute in the UK at some point over the course of 2019, the research, published by the Joseph Rowntree Foundation (JRF), concluded. The sobering data marks a 35 percent rise in impoverished households compared with 2017. Some 550,000 children were deprived of basic necessities in 2019, a shocking increase of 54 percent when compared to figures from 2017.

While economic hardship has become more pronounced over the past several years, the organization, which fights to improve living standards among the country’s poor, said that destitution levels are projected to double in the coming months as a result of “the pandemic and associated economic lockdown.” The grim forecast takes into account all relevant policy measures such as bolstered welfare programmes.

The study defines destitution as lacking two or more “essentials” for living, including shelter, food, heating, lighting, clothing, and toiletries. The term is also used to describe households with incomes that are so low that they are unable to purchase these items for themselves.

The findings come as the UK struggles to navigate what has been described as the worst recession in over 300 years. Unfortunately, the economic downturn has been particularly devastating for low-income families.

In August, researchers from the Child Poverty Action Group (CPAG) and the Church of England surveyed 285 low-income households and found that eight in 10 had taken a sizable financial hit since the start of the Covid-19 pandemic. The same month, the UK officially entered recession after its GDP plummeted by 20 percent. The Office for National Statistics (ONS) cited the UK’s protracted lockdown measures, which shuttered all ‘non-essential’ businesses, as a major factor behind the severe economic slump.