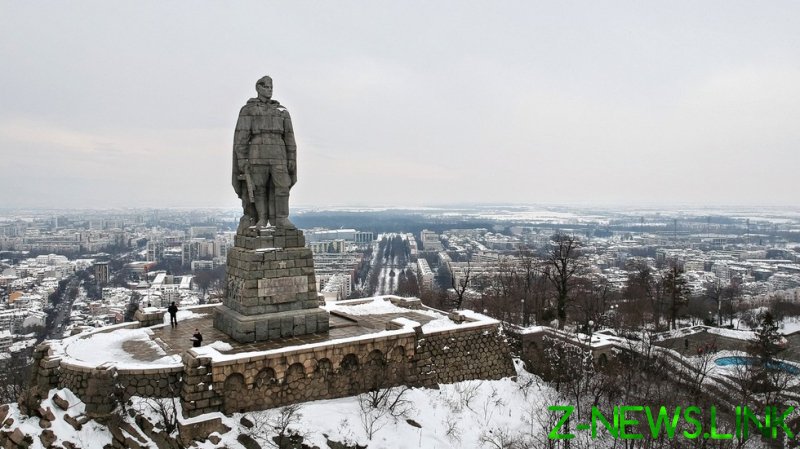 It has apparently become a yearly tradition for some bad actors to try and force us to unnecessarily debate simple historical truths about World War II.  As tensions ratchet up against Russia from Western countries, history is correspondingly revised or distorted to denigrate the Soviet Union’s unquestionable heroism during the war.

Some distortions have actually become so commonplace that they’ve become “common knowledge” in the West, particularly in the United States, which are mainly that the US, not the Soviet Union, won the war and that the Soviet Union had colluded with Nazi Germany.

Moreover, as is the subject of a recent book by Dr. Sean McMeekin, a member of the Academic Council of the US mouthpiece Victims of Communism Memorial Foundation, these revisionists believe that it was the Soviet Union and not Germany that actually started the war. (McMeekin’s book is literally titled ‘Stalin’s War’ and he spoke about it online with VoC, ironically, one day before the anniversary of Hitler’s death…).

These distortions are meant to denigrate the Soviet Union, as well as modern Russia and, I believe, the international communist movement by making communism out to be a genocidal ideology as bad as Nazism, or worse.

Yes, it’s true that the Germans and Soviets signed a Nonaggression Pact in 1939, but it was not an alliance. In fact, the Soviets were not the only European country to have such an agreement  since the French, British and even Polish had similar treaties with Germany dating from before 1939. It was meant to buy time for the Soviets, who were isolated under Western military pressure and sanctions, to defend themselves against an inevitable invasion.

In fact, according to a 2008 report by the Telegraph citing a retired Russian foreign intelligence service major general who had sorted through hundreds of declassified papers, the Soviet Union actually tried to form an alliance with Britain and France to squash Germany in 1939, before the start of the war. But as the Western nations dragged their feet, Moscow struck a pact with Berlin. The Soviets then took the opportunity to sieze parts of Belarus and Ukraine that the Polish had taken after the Polish-Soviet War that followed in the wake of World War I – in what is now known and maligned in the West as the Soviet invasion of Poland. This is so widely used to back the claims that the Soviet Union was as much to blame for the tragedies of WWII as Hitler (or more!) that one of the Kremlin’s biggest propaganda outlets, aka the German Foreign Ministry (this is sarcasm), had to denounce it in last year’s Victory Day press release.

It said, “The repeated attempt in recent months to rewrite history so disgracefully requires us to speak up loud and clear – something that should not actually be necessary in view of the irrefutable historical facts – and to leave no doubt whatsoever that Germany alone unleashed the Second World War by its invasion of Poland and Germany alone is responsible for the crimes against humanity of the Holocaust. Those who sow doubt about this and thrust other countries into the role of perpetrator do injustice to the victims, exploit history for their own ends and divide Europe.”

If we’re drawing parallels with Nazis, here’s one: American lawyer and Yale University Professor James Q. Whitman revealed in his 2017 book ‘Hitler’s American Model’, that indeed the Nazis were very much inspired by the United States of America.

They were particularly inspired by American race, citizenship and immigration laws and their propaganda often cited the US as an exemplar of white supremacy. The Nazis saw Eastern Europeans as savages and invoked the United States’ genocide of its Native population, the so-called Manifest Destiny, in their conquest of Eastern Europe.

Now, this is not to say that the Nazis unwaveringly admired the United States. They also saw the US as a place of liberal decadence and unabated “race mixing” that would eventually self-implode. To them, the US of that time was a once-great civilization in irreversible decline thanks to demographic shifts, what we would call the “great replacement” conspiracy nowadays, and which sounds eerily similar to some popular American political commentators.

At the same time, as the renowned scholar Michael Parenti noted in his famous book ‘Blackshirts and Reds’, there is undeniable evidence that Western industrialists, including in America, supported the fascists’ rise to power in order to combat the Soviet Union. As Parenti wrote, Henry Ford and Ford Motor Company supported the Nazis before and during the war and the Rockefeller-owned Chase Bank helped launder Nazi money.

Countless people and nations suffered unspeakable violence during the war, but it’s worth repeating, since so many Western audiences may not be aware, that some 27,000,000 people in the Soviet Union died at the hands of fascist invaders who sought to exterminate them to expand their Lebensraum (living space).

This is a cultural memory that few can fathom, and is unfortunately hardly included in any discussion of the history about World War II in the West. But it bears repeating. Moreover, today’s events suggest that the expansion of American influence in Europe has directly correlated with changing opinions about the war.

It’s no wonder why Russian President Vladimir Putin is pushing to ban speech that compares the USSR to Nazi Germany or Stalin to Hitler. Many European countries ban Nazi symbology and Holocaust revisionist speech, and indeed the narratives coming from some actors in the West falls into both of these categories. It’s false and extraordinarily dangerous.

Look, you don’t have to be a communist or a Russian to admit obvious historical facts and refute blatant lies pushed by Nazi-adjacent radicals. To quote legendary American writer Ernest Hemingway, “Anyone who loves freedom owes such a debt to the Red Army that it can never be repaid.”