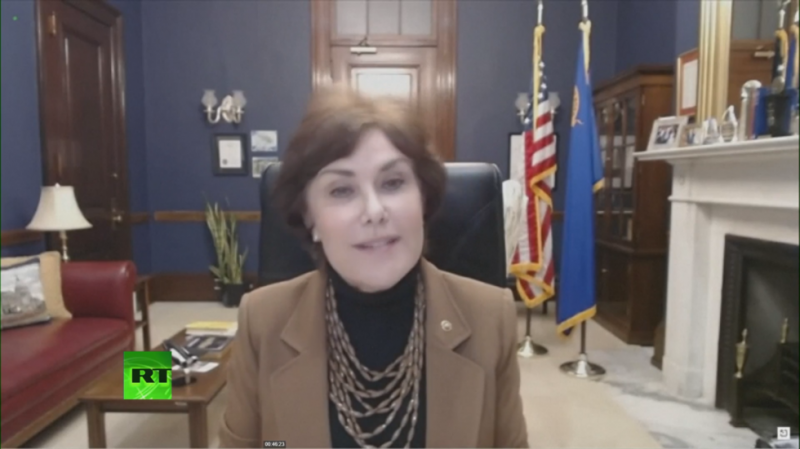 Krebs, a former Microsoft executive who led the Cybersecurity and Infrastructure Security Agency until he was fired by President Donald Trump last month, testified before the Senate on Wednesday.

While the president tweeted that Krebs had been “totally excoriated and proven wrong” at the hearing, Rosen, a Nevada Democrat, dismissed all claims by the Trump campaign lawyer Jesse Binnall as baseless.

There was no foreign interference in the election, but there was foreign ‘influence’ by Russia, Rosen claimed in her opening statement.

“Russian media sources such as RT and Sputnik were already pushing the narrative that the US would not conduct free and fair elections,” Rosen said, citing something called ‘Althea Group’ as her source, though the only company by that name deals with healthcare technology.

Rosen also cited something called the Election Integrity Partnership, which she said “found that social media accounts tied to the Russian Internet Research Agency amplified claims of election fraud leading up to the 2020 election.”

The EIP is actually a coalition of self-professed ‘disinformation’ crusaders, which includes such outfits as Graphika, the Atlantic Council’s Digital Forensic Research Lab, and the Stanford Internet Observatory and Program on Democracy and the Internet. Graphika and ex-DFR researcher Ben Nimmo and Stanford’s Renee di Resta (formerly of New Knowledge) are notorious for constantly blaming ‘Russians’, while words such as “tied to” and “amplify” do a lot of heavy lifting in their reports.

Rosen asked Krebs if any US election systems were hacked by “foreign adversaries” – something no one has actually claimed about the 2020 vote. He replied, choosing his words, that he wasn’t aware of “any voting machine involved in the casting or counting of votes in this election, or the certification process” being affected, at least as of his departure five weeks ago.

Satisfied, Rosen proceeded to argue that foreign adversaries were “amplifying the false perception our election process was fraudulent” and that “domestic actors amplified foreign disinformation campaigns” to undermine “confidence in our democratic process.”

While Rosen didn’t name any names, it was clear she was accusing the president’s supporters and campaign lawyers for spreading ‘Russian disinformation’. It’s similar to the debunked falsehood the mainstream media used to shut up Trump lawyer Rudy Giuliani ahead of the election, and censor the New York Post story about Hunter Biden’s shady business dealings.

Rosen also claimed that the Homeland Security Department “certified” that the 2020 election was the “most secure in US history.” In reality, the CISA published on November 13 a statement by two advisory bodies – the Elections Infrastructure Government Coordinating Council and the Elections Infrastructure Sector Coordinating Executive Committee. It was the mainstream media that somehow transformed the statement into a kind of official CISA or DHS conclusion, from where it became a “certification” in Rosen’s mind.

Claims of ‘Russian influence’ or ‘meddling’ in the 2016 US elections have been the staple of US mainstream media and congressional Democrats over the past four years, only to magically disappear when they declared Joe Biden winner of the 2020 presidential race – just to be reborn as the way to dismiss any Republican claims of vote irregularities, fraud or abuse.