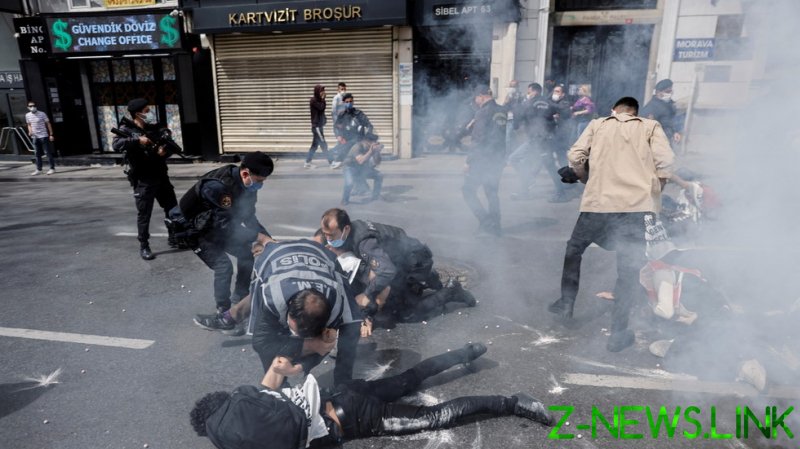 Dozens of protesters attempted to march in Istanbul’s iconic Taksim Square, marking Labor Day. Groups of demonstrators tried to approach the square from different directions, but they were met by a massive force of riot and plainclothes police officers.

Footage from the scene shows multiple police officers handling protesters, wrestling them to the ground and taking them away in police buses. Officers were seen brawling with the demonstrators and using pepper spray on them, as well as repeatedly deploying tear gas.

The Istanbul governor’s office said some labor unions had been allowed to hold certain events to mark the holiday, while only those who gathered “illegally” in violation of Covid-19 rules were targeted by police after ignoring calls to disperse.

A smaller-scale demonstration was also attempted in the western Turkish port city of Izmir. All in all, more than 200 people were detained across the country during the protests.

May Day this year falls during a 17-day partial lockdown in Turkey, which was announced by the authorities earlier this week. The lockdown includes stay-at-home orders, as well as the closure of schools and some businesses in a bid to halt the recently accelerated spread of coronavirus in the country.

Ahead of May Day, the chief of the Turkish police also reportedly issued a special circular, urging officers to detain anyone who films or records police during demonstrations and take “legal action” against them. According to the document, circulated by Turkish media, audio and video recording allegedly violates the privacy of the officers, who are being filmed without their consent.

While the circular has been called unlawful and criticized as a threat to citizens’ rights by advocacy groups, the police have remained silent on the matter and have not confirmed whether the document was authentic.