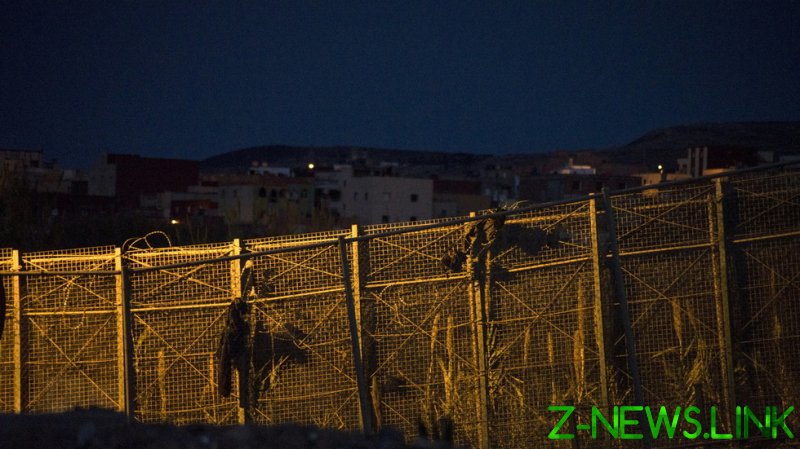 Scores of migrants attempted to cross over to Melilla on Tuesday, facing off with members of Spain’s Civil Guard that blocked the entrance. Footage of the altercation shows migrants advancing along a border fence toward the officers. The migrants can then be seen hurling stones, prompting the officers to respond with pepper spray.

While the authorities were vastly outnumbered by the migrants, none of the unwanted arrivals managed to sneak to the other side of the border, a spokesman for the central government’s delegation in Melilla reported, noting “active collaboration” from Moroccan security forces, as cited by El Mundo.

The majority of the guardsmen suffered minor injuries, such as bruises, and six were placed on medical leave following the showdown, he said.

The botched entry attempt took place in the area of the South Dike.

The head of the delegation, Sabrina Moh, praised the officers for “commendable work” “in defense of our borders.”

“Thanks for the work this morning in Melilla, for your vocation of service and for always ensuring our safety,” she tweeted.

Melilla – on par with another of Spain’s North African enclaves, Ceuta – has been at the center of the current migrant crisis, exacerbated by a bitter row with Morocco, which erupted after Madrid allowed the independence leader of the disputed Western Sahara, Brahim Ghali, to receive medical treatment in Spain in April without notifying Rabat.

As the countries locked horns over the issue, around 9,000 migrants crossed into Ceuta from Morocco, with Madrid blaming the onslaught on relaxed border controls. Facing wrath from the Spanish government, Morocco subsequently pledged to take back all the migrants, saying they are “ready to cooperate” with European and the EU nations in tackling the crisis.

However, the dispute is far from settled. Last week, Morocco accused the Spanish government of trying to “Europeanise the crisis” and deflect attention from the underlying causes driving migration.

Moroccan Foreign Minister Nasser Bourita also lashed out at Spain, saying that Madrid “cannot fight separatism at home and encourage it in its neighbor.”

On Tuesday, Spanish Foreign Minister Arancha Gonzalez Laya announced that Madrid is considering whether to include the two autonomous cities in Europe’s Schengen area, an apparent bid to make Spain’s border shenanigans an EU-wide issue. At present, Moroccans from the neighboring towns can travel to the enclaves visa-free, but not to continental Spain.