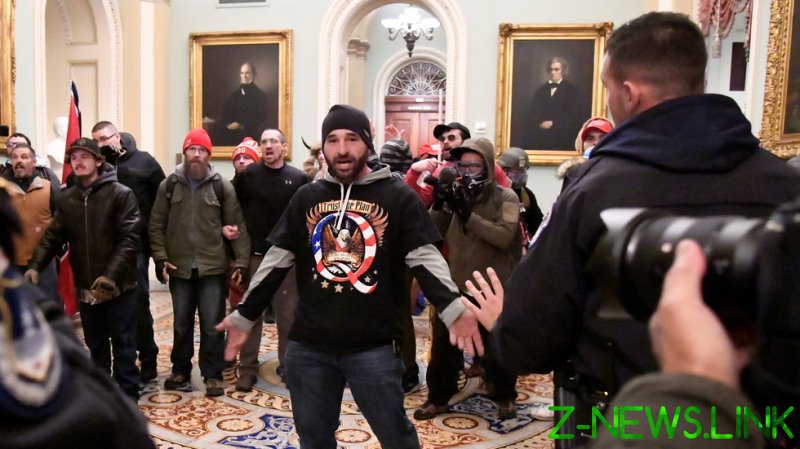 Released on Wednesday by the Public Religion Research Institute, the poll found that 15% of American adults believe the statement “the government, media and financial worlds in the US are controlled by a group of Satan-worshipping pedophiles who run a global child sex trafficking operation.”

Among Republicans, belief in this statement rises to 23%. Among Independents it falls to 14% and, among Democrats, 8%.

One in five Americans also believe another core tenet of the QAnon movement: that “there is a storm coming soon that will sweep away the elites in power and restore the rightful leaders.” Again, Republicans are more likely to believe in this statement (28%), than Democrats (14%).

Similarly alarming results were seen regarding the statement: “because things have gotten so far off track, true American patriots may have to resort to violence in order to save our country.” 15% of all Americans polled, 28% of Republicans, and 7% of Democrats agreed with this statement.

The QAnon conspiracy theory is a loose set of beliefs popular among some of former president Donald Trump’s most ardent supporters. Originating as a series of cryptic posts on the 4chan messageboards in 2017 by an anonymous poster purporting to have high-level government clearance, the theory quickly found traction among Trump supporters convinced – and not without reason – that the political establishment was working to undermine his presidency.

Long before QAnon was thrust into headlines and associated with “domestic extremism” and “insurrectionism” after the Capitol Hill riot this January, it was largely written off as a kooky movement on the far fringes of the American right, particularly due to its recycling of ‘Pizzagate-style’ conspiracy theories into its “the US is controlled by Satan-worshipping pedophiles” tenet.

From the ‘New World Order’ theories popular among militia groups in the early 1990s to the perennial occupation on the political fringes with hidden Masonic and Illuminati plots, conspiracy theories have long flourished on the Right. Unlike these other theories, however, QAnon offered its adherents false hope instead of doom and gloom. They were told that despite Joe Biden’s electoral victory, Donald Trump was working behind the scenes with loyalists in the military to round up and jail the Democrats supposedly involved in the Satan-worshipping pedophile ring. ‘Q’s 4chan posts told them to “trust the plan.”

Even after Biden became president and none of the theory’s outlandish claims panned out, QAnon followers still clung to the story. As recently as February, rumors circulated in Q circles that Trump would be inaugurated in March, based on some centuries-old legal wranglings.

Even though QAnon’s theories are easy to dismiss, many Americans on the Right feel that Biden’s win was illegitimate. A Reuters/Ipsos poll taken last week found that a quarter of Americans, and more than half of Republicans, believe that Donald Trump is the “true president” of the United States.