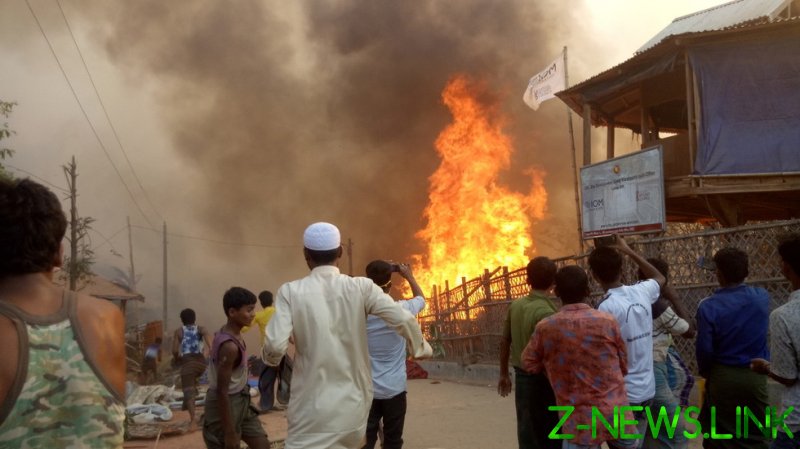 The “massive” blaze at the Balukhali camp, in Bangladesh’s southeastern town of Cox’s Bazar, saw thousands of shelters reduced to rubble and possessions destroyed.

With 550 people having been injured and more than 400 so far unaccounted for, UNHCR’s representative in Bangladesh, Johannes Van Der Klaauw, described the scenes as “devastating”. The current death toll of 15 looks certain to rise.

The cause of the fire is not yet known, and Bangladeshi officials were on the scene on Tuesday carrying out an investigation.

One of the residents of the camp, Aman Ullah, told reporters that “everything has gone” and “thousands are without homes” as a result of the conflagration. He described seeing smoke billowing from the site of the blaze “all night long.”

The humanitarian-aid organization the International Federation of Red Cross and Red Crescent Societies arrived promptly on the scene to help tackle the fire, which spread through four sections of the camp in which some 124,000 people are believed to have resided.

On Tuesday, Sanjeev Kafley, of the Red Cross, bleakly explained that “these people have been displaced two times. For many, there is nothing left.”

It’s not the first time this year that a fire has ripped through a camp in Cox’s Bazar. The area saw two blazes in January alone, one having been described by UNICEF as an “arson attack.” The destruction caused by those earlier incidents destroyed 550 homes, displacing 3,500 refugees.

Nearly a million Rohingya Muslims are thought to have fled Myanmar and sought refuge in camps in Bangladesh after a 2017 crackdown by the regime on their people – a stateless group often described as the world’s most persecuted minority. International organizations, including the UN, have condemned their treatment as a “textbook example of ethnic cleansing.”

Myanmar’s government, which was removed from power in a February coup by the military, repeatedly denied targeting Rohingya people.