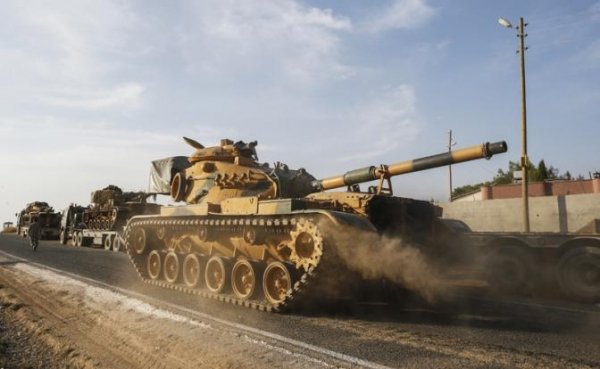 Turkish President Recep Tayyip Erdogan said that soon in the Syrian province of Idlib may start a new military operation. Official Ankara intends to regain control over the breakaway province, not to leave it to the Syrian President Bashar al-Assad, which Turkey does not consider the legitimate head of state.

The scandalous statement Erdogan made the next day after the Turkish-Russian talks in Moscow. Negotiations on the fate of Idlib, as well as some of the previous rounds, proved a failure, Erdogan said.

Idlib is not the only place where we can confront the Russian and Turkish troops. The likely threat of full-scale war in Libya, where Moscow and Ankara are supporting different sides of the civil war.

Erdogan’s statements were preceded by several points of tension between Russia and Turkey. In particular, Gazprom reported record drop in shipments to Turkey, which were the lowest in 15 years. The Russian Ambassador in Turkey Alexey erkhov said about the threats that come to him because of Moscow’s position regarding Syria.

Press Secretary of the President of Russia Dmitry Peskov in a familiar soothing tone said that the Kremlin will still be in contact with Turkey to prevent “further pressure”. About what is happening in the middle East, the “Free press” was discussed with a senior staff member of the Institute of Oriental studies, Russian Academy of Sciences Professor Mikhail Roschin

“SP”: — Mikhail, we launched the “Turkish stream”, and then Istanbul began to make all sorts of accusations. Is this an attempt by Erdogan to blackmail Moscow, extorting discounts on gas or other preferences in the energy market?

— The fact that gas in Turkey is less bought, it is because there is also very warm. In Moscow and in the Central region, too, this winter was not just a few cold days. But there is, of course, the foreign factor: more likely, the bargaining began among the partners who have matched and unmatched interests. That is why Libya is so important, that there is a struggle for section of spheres of influence in the field of energy. Erdogan saw the springboard for improvements in this sense their positions.

“SP”: — And what is happening around Libya? Turkey obviously sees it as a springboard to build strength in the middle East. Do you think that if today the threat of a direct military conflict between our countries?

I think Libya could eventually start a real war. So bargaining around the country will continue. Since the country is actually divided into two parts: the Western Libya (Tripolitania) and Eastern (Cyrenaica), a reasonable compromise could lead to the identification of relevant areas of influence of major political players, primarily Russia and Turkey. Exactly this, and achieved at the beginning of January, Erdogan when he was through Parliament about the deployment of Turkish military in Libya, but in practice, in the Tripoli district of the metropolis.

However, controlling the area of the Tripoli metropolis, it’s hard to claim control over the entire territory of Libya, the fourth area of the country of Africa.

You can talk about what the government Faiza Zarraga is the legitimate government of Libya, but if we remember that unlike Eastern Libya, it has no standing army and controls about 10% of the country, this argument seems quite ridiculous.

“SP”: — And how likely is our military clashes in Idlib?

— The main thing is that Syria has signaled that it is determined to regain Idlib. It is obvious that Russia supports Assad. He, in contrast to Erdogan — one of our closest allies. Talks at the expert level to no avail. So now again to the meeting of Putin and Erdogan. In the end, if Erdogan wanted to get a good settlement in Idlib, he should formally recognize the legitimacy of the Assad government. But I think its without it gradually from Idlib squeeze.

“SP”: — Now, obviously we are going through the next deterioration of relations between Russia and Turkey. How likely scenario is a repetition of the events of 2015, when we imposed sanctions against Turkish tourism industry and agriculture?

— I think the 2015 scenario is unlikely. The cooperation between the two countries, Russia and Turkey, has made great progress during this time despite the fact that Turkey’s relations with the United States and the European Union is constantly complicated. I see no reason why the Turkish leadership for a sharp reversal and, therefore, will inevitably have to negotiate and find suitable conditions for compromise.

“SP”: — Recently, Russian Ambassador Argov said about threats to your address due to the events in Idlib. Should we be afraid?

About Ambassador Erchova don’t think that we should seriously fear. To avenge Idlib can and probably will try, but most likely outside of Turkey. After the murder of Ambassador Andrey Karlov, I think, in Ankara strengthened the protection of the Embassy.