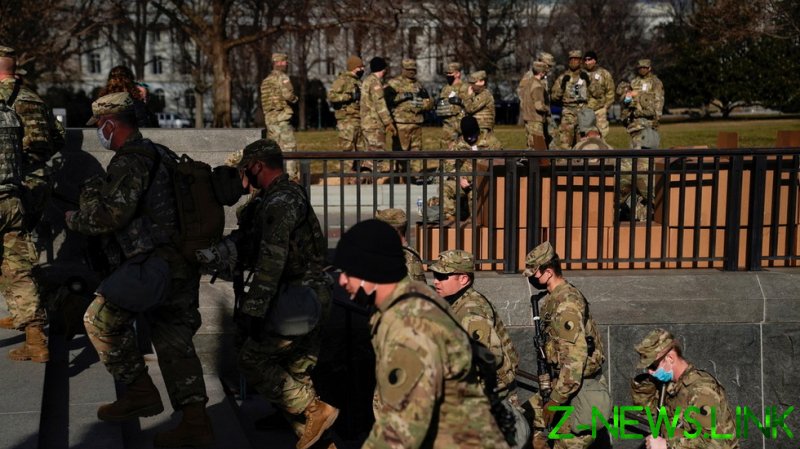 The 12 servicemembers were removed from the detail after alleged ties with right-wing militia groups or “extremist” material they’d shared online were discovered, two military and intelligence sources told the Associated Press on Tuesday.

According to Acting Defense Secretary Chris Miller, however, the Pentagon’s vetting process had found no evidence of any “insider threat” to the Biden ceremony as of Monday, and the anonymous officials confirmed none of the removed National Guard members posed a threat to Biden. The FBI has been tasked with running “name checks” on the National Guard members in addition to the Pentagon’s vetting.

National Guard chief Daniel Hokanson confirmed that 12 service members had been sent home but stated that only two had been pulled for “inappropriate comments or texts related to the inauguration.” The other ten were removed for “security liabilities” related to possible previous criminal activity.

The Secret Service sent a memo to all 25,000 of the National Guard troops involved in security for the inauguration ceremony, reminding them not to share “locations, pictures or descriptions online regarding current operations or the sensitive sites they are protecting.” The agency complained there had been an “uptick” in National Guard service members posting details of their postings online.

READ MORE: ‘As if it was Baghdad’: US Secret Service creates fortified ‘Capitol Green Zone’ ahead of inauguration

Security for Wednesday’s ceremony has been ramped up after the Capitol raid earlier this month that ended with 5 people dead. However, both event participants and after-the-fact observers have remarked on the smaller-than-normal police footprint at the building, while others have pointed to extensive footage showing Capitol police actually letting protesters into the building.

However, the situation at the building soon became violent, leading to the shooting death of demonstrator Ashli Babbitt and the bludgeoning death of police officer Brian Sicknick. Capitol Police chief Steven Sund resigned shortly after the riot.

President Donald Trump became the first president to be impeached twice as the House of Representatives held him responsible for fomenting an “insurrection” at the Capitol – though there was evidence protesters planned to swarm the building before he addressed them in front of the White House.