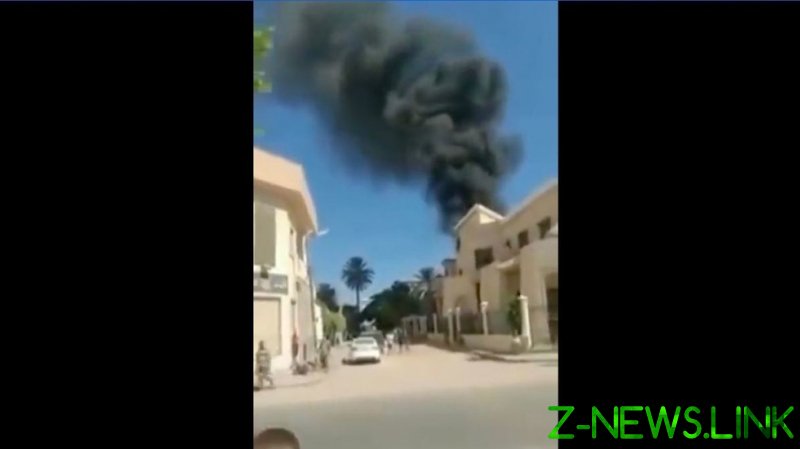 Intense fighting broke out in the Libyan capital of Tripoli on Saturday night. The city has since been engulfed by violence, according to witnesses cited by international media. The violence has claimed the lives of at least 12 people, the Tripoli-based Libyan Health Ministry said, calling it “preliminary” figures. It is also unclear whether those killed were combatants or civilians.

The fighting has also left at least 87 people injured, the ministry added. Photos and videos that surfaced on social media show plumes of black smoke billowing over the city as armed personnel and military hardware moved through its streets. Several videos also purportedly showed residential buildings being hit by artillery fire. Shooting and blasts could be heard on some videos.

Some media already described the fighting as the worst in two years, during which the war-torn nation has seen relative peace. Two governments – the Tripoli-based Government of National Unity (GNU) under Prime Minister Abdulhamid al-Dbeibah and its rival administration led by Fathi Bashagha supported by the Libyan parliament based in the eastern city of Tobruk – are still vying for power in the country.

Clashes erupted on Saturday night as one of the major Trlipoli-based militant groups assaulted a base held by another group supporting a different government. The militants have been using small arms as well as machine guns and mortars during the fighting.

According to Reuters, major forces, including hundreds of vehicles, are now entering the city from several sides, including west, east and south. The forces are said to be supporting the parliament-backed government of Bashagha. Yet, it is unclear if he seeks to mount an offensive on the Libyan capital and overthrow al-Dbeibah by force. Both leaders have already accused each other of disrupting the political negotiations that were expected to help the warring parties reach an agreement.

Bashagha is also supported by the Libyan eastern commander, Khalifa Haftar, who still has close ties to the Tobruk-based parliament. Haftar sought to launch his own offensive against Tripoli back in 2019 but his attack eventually failed, leading to a 2020 ceasefire and a UN-backed peace process.

The UN Libya mission expressed its concern at the shelling of civilian districts during clashes and called for an immediate ceasefire. Libya has been in turmoil since the 2011 NATO-backed coup ousted the nation’s long-time leader, Muammar Gaddafi, who was later murdered. The nation has been split between the eastern and western governments since 2014. The UN-backed peace process envisioned national elections scheduled for December 2021 but the idea was abandoned amid disputes over the vote. The development has seen tensions rising between the two rival powers again.