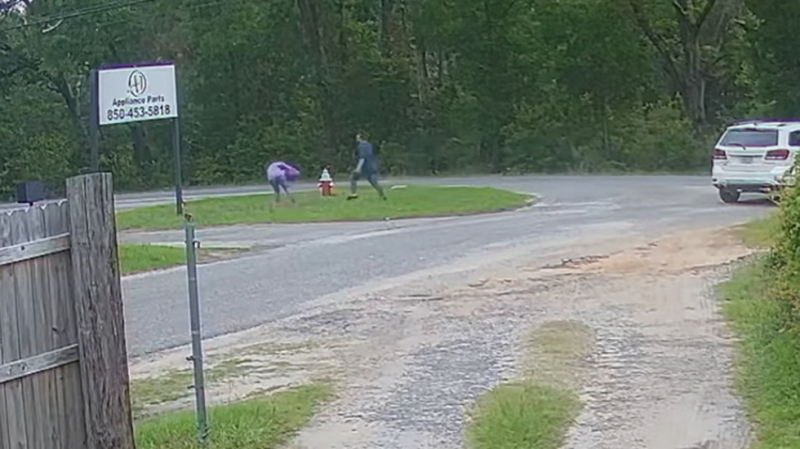 The 11-year-old was playing alone at a bus stop in West Pensacola, Florida, when the terrifying attempted abduction occurred. Surveillance footage released by law enforcement shows a car circling the area before abruptly stopping on the side of the road. A man, reportedly armed with a knife, then exits the vehicle and runs towards the girl, lunging at her. Seeing him approaching, the child gets up from the ground and attempts to run away, before being grabbed. The suspect then tries to carry her to his car, but falls to the ground. After a brief struggle, the girl is able to free herself. She then picks up her bag that she dropped on the ground and runs away, as the kidnapper hurries back to his car and flees the scene.

The local sheriff’s department mobilized its entire force of 50 deputies in an effort to catch the perpetrator. Using surveillance footage, officers were able to track him down in less than eight hours. He was found at his home and reportedly surrendered to authorities without incident. In an attempt to evade authorities, the man had repainted his car.

The 30-year-old suspect was charged with attempted kidnapping of a child under 13, aggravated assault and battery. The man has a criminal record, including sexual offenses with a child, Escambia County Sheriff Chip Simmons said during a press conference.

Simmons hailed the girl for her “resilience,” describing her as a “fighter.”

“We’re very fortunate that her family has her home today and we’re not looking for a missing little girl,” he said, noting that her “animal” attacker was no longer a threat to the public.

The girl suffered scratches from the incident but was otherwise physically unharmed. According to authorities, the same man had approached her two weeks ago, an encounter described as uncomfortable.