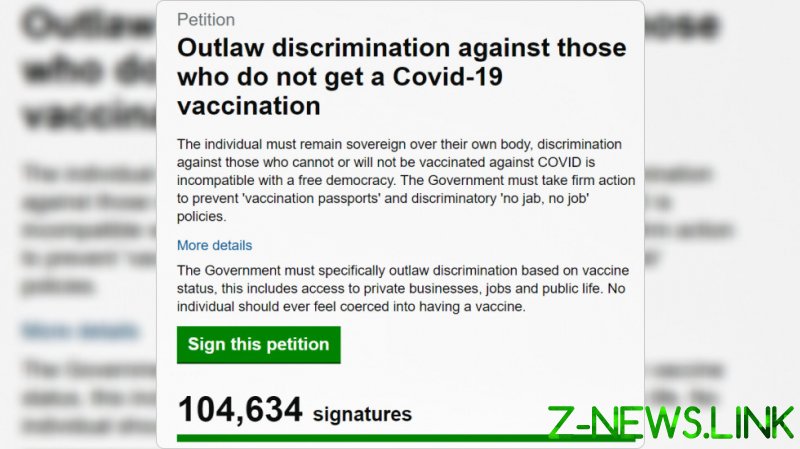 A petition which started in February has gathered pace on Tuesday, with thousands add their names to the growing list of people calling for the government to do more to prevent legalised ‘discrimination’ against people who aren’t vaccinated against Covid-19.

“The Government must specifically outlaw discrimination based on vaccine status, this includes access to private businesses, jobs and public life. No individual should ever feel coerced into having a vaccine,” the petition states.

Tens of thousands of people signed the petition on Tuesday morning, following a day of unrest in the capital in which hundreds of angry protesters clashed with police, having called for the arrest of Prime Minister Boris Johnson.

Links to the petition have been widely shared across Twitter, with English band Right Said Fred receiving more than 1,200 retweets on their call for people to sign.

Others vented their anger in other ways on Twitter, calling once again for the prime minister to be arrested. Many went as far as comparing the Covid-19 restrictions to Adolf Hitler’s Germany, with ‘Nazi’ trending on the social media platform.

On Monday, people gathered outside the Palace of Westminster to protest measures aimed at preventing the continued spread of Covid-19 virus. While Monday, termed ‘Freedom Day’, saw the last of the major restrictions lifted, the government has laid out plans to mandate the use of vaccination certificates at crowded venues in England.

Despite having one of the world’s highest vaccination rates against Covid-19, many young people have elected not to get jabbed. Under the government’s current plans, unvaccinated individuals will be prohibited from entering venues such as nightclubs from September. Johnson’s government had previously ruled out the idea of making entry to venues dependent on vaccination status.

The government’s U-turn came just hours after nightclubs were allowed to open for the first time in 16 months. Amid the condemnation of the Johnson’s plans, some have suggested that mandatory vaccination passports will help provide peace of mind to some Covid-wary clubbers and others attending large gatherings.